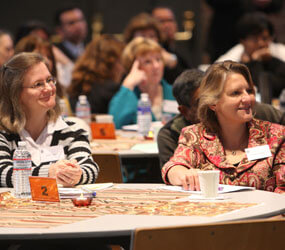 COLUMBIA – Archbishop Edwin F. O’Brien delivered a strong rebuke to anti-immigrant sentiment Oct. 21, calling it “a scandal” and a “disgrace.”

The archbishop spoke at a Hispanic ministry conference at St. John the Evangelist in Columbia, telling ministry leaders from the Archdiocese of Baltimore, the Archdiocese of Washington and the Wilmington diocese that xenophobia exists in “some of our own Catholic people.”

While hopeful of the ministerial leaders attending the conference, it was clear the archbishop had grown weary of political partisanship.

“We have a long way to go,” the archbishop said. “I can’t wait until this election is over. Because then maybe we can get down to work and take it seriously, without all the acting and role playing that inevitably takes place in a time like this. We really need to get to work with our politicians and our leaders to say, ‘let’s solve this immigration challenge. Let’s make sure that those who are here and hard-working, those who are trying to put bread on the table, are not penalized because of some poor law that is on the books that we’re afraid to address.’ ”

The leaders at the conference, titled “Community of Communities: The Bilingual Multicultural Parish” came to talk about strengthening evangelization. All three dioceses present have significant Latino/Hispanic populations that are rising. All have the same questions regarding integration and serving those populations liturgically.

Maria Johnson, director of Hispanic Ministry for the Archdiocese of Baltimore, said the gathering of the three dioceses offers different experiences and perspectives.

“We’re on the same page, more or less, but with some different thoughts,” Johnson said.

The archbishop said the liturgy should be a rich and welcoming experience for all races.

“There’s no such thing as a church with a white face anymore,” Archbishop O’Brien said. “It’s brown, it’s black, it’s yellow. We shouldn’t just accept that. We should welcome it. We should embrace that because we are so much better for it.”

Jesuit Father Allan Figueroa Deck, executive director of the Secretariat of Cultural Diversity for the United States Conference of Catholic Bishops, presented the facts of the rapidly-changing demographics of the American church.

Father Deck said parishes have to address the large number of Catholics who have left the faith, while welcoming Latinos to the American fold.

Father Deck said the church has “ceased being a church primarily of European people. What it will become, as a result of these new currents, our response, our activities, our decisions will determine it at this moment and moving forward.”