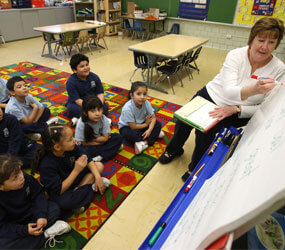 Archbishop Borders School principal Cathy Marshall has always placed an emphasis on strong Spanish and English programs for her students.

Now, her school is poised to take an innovative step forward as Archbishop Edwin F. O’Brien announced March 22 that the Baltimore City institution will host the first Catholic dual-language program in the archdiocese, starting this September.

“It will work and it will work in a gradual way,” Marshall told The Catholic Review. “I think that it’s going to, particularly for our Spanish-speaking students, so they get a firm grasp of their first language. In that way, it will help them to become literate in both English and Spanish. For my English speakers, it will increase their ability to grasp English easier. Hopefully it will give them an advantage in this multi-cultural world. It’s really exciting”

The program will initially be taught in kindergarten and first grade before expanding in future years to the entire school, which serves up to the eighth grade. Younger children, Marshall said in an archdiocesan statement, “have the ability to develop language skills because they have better mental flexibility and improved listening and memory skills.”

Marshall said the ultimate goal is to produce graduates who have fluency in both English and Spanish, while reading and writing those languages as well.

Archbishop Borders offers Spanish classes once a week in grades pre-K to four and twice per week for fifth through eighth graders. She said students in some grades will be able to push past struggles with their languages in middle grades thanks to the new program.

When Archbishop O’Brien announced the consolidation of 13 schools in the Baltimore City and Baltimore County March 4, he also said improved academic programs were going to be offered to enhance Catholic schools’ standing in the marketplace. The dual-language program was one of seven programs proposed.

According to the archdiocese, 55 percent of the school’s students are of Hispanic descent. Tuition at Archbishop Borders School is $4,600 a year. Marshall hopes the program will boost class size to between 22 to 25 students a classroom.

Marshall said it her hope that students will develop a cross-cultural awareness.

According the archdiocesan statement, there were only two dual-language programs offered in the state of Maryland last year.

The Task Force on Preservation of Heritage Language Skills recommended the creation of at least 10 new dual-language programs for Maryland public schools by 2012.

Marshall said there are currently two bilingual teachers on staff at Archbishop Borders. She said more will be trained as English as second language instructors.

The principal believes the implementation during the next few months will be challenging, but smooth.

“It’s almost like a natural thing for us,” she said. “We already have so many things in place.”

Above all else, she said, the program will pay future dividends for students.

“This increases their opportunities when they get to high school,” she said. “Maybe English speakers will be able to take a third language.”