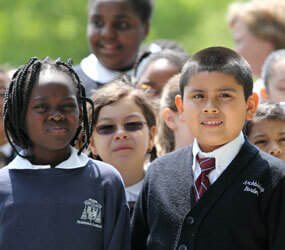 Also among the crowd of hundreds was a contingent of more than 30 students from the institution that bears his name – Archbishop Borders School in Highlandtown. A few of those students met the archbishop in 2003 when they just third graders.

The school had opened months earlier, in September of 2002, after St. Elizabeth of Hungary and Our Lady of Pompei schools merged. That meeting, while brief, resonated with the students. They remember a happy man who lived by example.

“It’s real important to be here because he supported our school,” said eighth-grader Diana Liz before the funeral.

The archbishop’s 2003 visit was one of the few times he was able to walk through the building because of ailments, principal Cathy Marshall said. Marshall said she regularly visited with Archbishop Borders to provide budget and meeting information. The archbishop and his relatives contributed to a school endowment.

Marshall, who was noticeably emotional following the funeral, said she “found him to be a brilliant man.”

Some students came wearing a uniform emblazoned with the 13th archbishop’s coat of arms. Reminders of the late spiritual shepherd exist all around the school, Marshall said. A picture of him hangs there and excerpts from his book “Spiritual Living in Secular Society” are regularly integrated into lessons. After his death, a prayer table was set up as well.

“What we are trying to get across is that Archbishop Borders’ basic spirituality was living the faith,” Marshall said. “He really exemplified faith in action.”

Students wrote him birthday cards every year and they thought about him more during his battle with colon cancer.

“Every morning we would pray for him when he was sick,” eighth-grader Jasmine Brown said.

Since his April 19 death, the eighth graders who met Archbishop Borders said they have felt an obligation to tell younger students about the school’s inspiration. They also cherish the opportunity to attend the school that will be part of his legacy.

“It’s real important,” Liz said, “because we know it’s going to be a really good school and that it teaches children really good things about religion.”

Memorial contributions are being accepted to benefit children attending Archbishop Borders School. Checks may be made to the Archbishop Borders Educational Enhancement Fund and mailed to the Catholic Family Foundation of the Archdiocese of Baltimore, 320 Cathedral St., Baltimore, MD 21201. Visit www.archbalt.org/cff for more information.