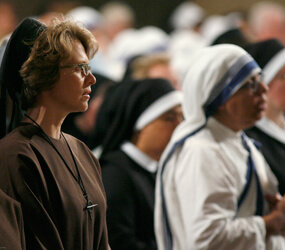 WASHINGTON – Questions about membership, living arrangements, the ministries in which members participate and spiritual life, including the practice of prayer and the frequency of Mass, are included in a questionnaire sent Sept. 18 to 341 congregations of women religious in the U.S.

Distribution of the questionnaire opens the second phase of a comprehensive study of U.S. institutes of women religious ordered by Cardinal Franc Rode as prefect of the Vatican’s Congregation for Institutes of Consecrated Life and Societies of Apostolic Life.

Divided into three parts, the questionnaire reveals more about the depth of the study, known as an apostolic visitation.

One part of the questionnaire, designated “Part A” and encompassing eight pages, seeks data about membership, living arrangements, governance and ministries of the members of the religious orders.

A second section, designated “Part B” and encompassing six pages, seeks information related to the operation of a religious order including its origins, identity and charism; governance; vocation promotion, admission and formation policies; spiritual life and common life; mission and ministry; and finances.

The third part, designated “Part C” and one page in length, asks for contact information for the major superior responsible for completing the questionnaire.

“The questionnaire is an extremely important part of the process of the visitation requested by the Congregation for Institutes of Consecrated Life and Societies of Apostolic Life,” Mother Mary Clare Millea, the apostolic visitator charged by the Vatican with directing the study, wrote in a letter accompanying the survey.

Mother Clare, superior general of the Apostles of the Sacred Heart of Jesus, said in the letter that the Center for Applied Research in the Apostolate at Georgetown University is assisting in the “effort to gain a clear picture of women religious in our country today.”

She said CARA assisted her office in developing the wording of questions in Part A and will collect and compile the information gathered in that portion of the survey.

Responses to Parts B and C are to be sent to the apostolic visitation office for compilation.

Sister Eva-Maria Ackerman, a member of the American province of the Franciscan Sisters of the Martyr St. George who is coordinating efforts in the visitation office in Hamden, Conn., told CNS in an e-mail message Sept. 21 that Mother Clare would not comment on the questionnaire.

In addition, one question seeks demographic data regarding race and ethnicity of sisters.

An extensive series of questions asks about living arrangements for current members of orders. Specifically, the questionnaire asks how many sisters live outside of a religious house and whether they live alone, with other members of their order, with members of other orders, with associates of an order, with family members or with laity who are not members of an order.

Several questions also revolve around members who have left an order. It asks for information about the years of departure in the periods between 1999 and 2004 and 2004 and 2009 and the age of each sister who left.

Part B requests information related to the operation of religious orders.

Under each area a series of questions seeks to gain information about how the religious institutes are evolving today.

Some of the areas explored in the questions include: who is involved in governance, including associates and lay people, and to what extent; decision-making procedures; how individuals sisters can speak up when they disagree with a corporate decision made by the order’s members; practices regarding the formation of novices; continuing education within the order; the frequency of celebrating the Eucharist as a community; whether eucharistic celebrations follow liturgical norms; how major superiors ensure that members maintain a vow of poverty; the relationship between bishops and the order by members; accountability of income, such as salaries, stipends, gifts and donations; the transfer of ownership of buildings and property to other entities as well as the acquisition of buildings and property; and the sharing of goods with the poor.

Major superiors have until Nov. 20 to complete the questionnaire. The deadline was adjusted by three weeks because the document was delayed from a planned early-September distribution.

Congregational leaders have the option of completing the questionnaire online or on paper.

The study covers about 59,000 American nuns, all but those living in cloisters.

Mother Clare’s final report, expected in mid-2011 and based on what will be learned from the questionnaires and the apostolic visits, will be sent to the Vatican congregation. Her letter reiterated that the report will remain confidential.

The full questionnaire guiding the apostolic visitation process can be viewed online at www.apostolicvisitation.org.