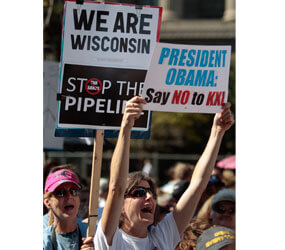 WASHINGTON – What started as a smallish protest in a New York City park in mid-September to rail against banks and wealthy Americans for their seeming indifference to the plight of poor and working-class Americans in a sluggish economy has spread to several major U.S. cities.

By early October, the “Occupy Wall Street” movement had landed in Washington, with multiple events, including a demonstration outside the U.S. Capitol and separate encampments at prime downtown sites.

The “October 2011” protest that geared up Oct. 6 at Freedom Plaza in Washington had been in the planning stages for a year to coincide with the 10th anniversary of U.S. military involvement in Afghanistan, said Lisa Simeone, a member of the protest group’s steering committee. Then the Occupy Wall Street protests sprang up, which the October 2011 group saw as a beneficial symmetry, she added.

Although budget estimates have placed the cost of the wars in Afghanistan and Iraq at about $1.3 trillion, Simeone put the figure at “$4 trillion and still coming.”

“They’re making money off these wars,” Simeone said of banks and war contractors. “Why are the banks who got bailed out with taxpayer money not giving people money for mortgages?”

Helma Lanyi of suburban Bethesda is convener of the Episcopal Peace Fellowship’s Washington chapter. She was holding up a sign with her organization’s name. One woman passing her and seeing her sign remarked, “Boy! If we had the mainline churches getting on board, that would be great!”

“I’m walking around to see friendly faces,” Lanyi, a native of Germany, told Catholic News Service Oct. 6, adding she was concerned that U.S. democracy was at risk.

“What has happened in our country today over the last 30-40 years is that the emphasis has shifted from the human person to corporate greed,” she said. “Polls have shown that the public is not behind the policies of the government,” adding that from her experience in Germany she has “seen what happens when democracies are undermined.”

Chrissy DeFontenay of Washington, a member of the Washington Region Religious Coalition Against Torture, said she got involved in that group because she spoke French “and they needed a translator.”

Her agenda at Freedom Plaza was to build support against construction of a pipeline from Canada that would funnel oil derived from tar sands. “Tar Sands Oil Means Game Over for the Climate” read her banner.

DeFontenay said her activism began at age 15, when she was thrown out of the bus station in Dallas for standing in the “Negro” line during the days of segregation. “They said, ‘You can’t do that,’ ” she recalled. “I said, ‘I’m a descendant of Adam and Eve and so are they.’ ”

In New York, where the protests began, Catholic religious who are active in bringing Wall Street to account voiced admiration for the protesters.

“The occupation of Wall Street puts into words and pictures the numerous protests that are going on in many communities across the country about the extent of the pain and suffering that Wall Street has visited upon thousands of people by their reckless betrayal of the public trust, their sustained lack of remorse, their cozy relationship with Washington leaders and regulators and the inability and unwillingness of both sectors to keep people in their homes and create jobs,” Father Seamus Finn told CNS in an email.

The priest, an Oblate of Mary Immaculate, is on the board of directors of the Interfaith Center for Corporate Responsibility.

“It always amazes me that young people throughout the decades I’ve been living have always responded to a number of critical social and economic issues,” said Sister Barbara Aires, a member of the Sisters of Charity of St. Elizabeth, N.J., and her order’s coordinator of responsible investments.

“They’re always keenly alert to a number of things that seem to be totally unfair to a significant number of the human community not only in the United States but around the world,” she said in an Oct. 5 telephone interview with CNS from Jersey City, N.J.

With her order being a member of ICCR, Sister Barbara said, “we have been dealing with the major financial institutions for a couple of decades.”

“We brought to the attention of the banks in 2004 and 2005 troubles with the derivates, the lack of financial disclosure, transparency,” she continued. “We filed a resolution in 2005 with JP Morgan Chase, we filed objections to collateralized debt obligations, we dealt with Goldman Sachs, we’ve interacted for years with Citi, with Morgan Stanley. Some have dealt with Wells Fargo, And how can I forget Bank of America?” It took over Countrywide, one of the leading mortgage lenders before the housing market suffered a body blow in 2008.

Dominican Sister Pat Daly, executive director of the Tri-State Coalition for Responsible Investment, told CNS in an Oct. 5 telephone interview from Montclair, N.J,. That she was impressed with the stick-to-itiveness of the Occupy Wall Street protesters.

Asked whether she thought the protesters would think of faith-based investment groups as sell-outs, she replied, “If they knew what we’d done, what the faith community had done for the last 40 years or so. … Our work is not very well known. It’s an insider strategy, but there haven’t been many outsider strategies.”

Still, Sister Pat said, “I’m thrilled to see this momentum as more and more people are taking to the streets.”

But Father Robert Sirico, founder of the Acton Institute for the Study of Religion and Liberty in Grand Rapids, Mich., said of the protests: “It reminds me of the Sixties. I think it’s misdirected.”

But Father Sirico said he could find common cause with the protesters on one condition: “If they want to define what they’re protesting, and they want to say we’re protesting the bailouts, I say fine, sign me up.

“But that’s not very clear at all as to what’s going on here.”