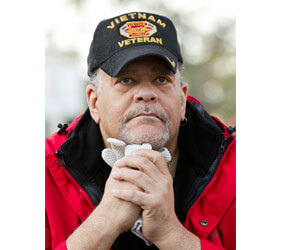 WASHINGTON – Jon Proctor knows the road to self-sufficiency is a long one. It’s even longer when the weekly paycheck totals a little more than $200.

“We’re trying to get back on our feet,” the 55-year-old divorced father of six says, explaining how he’s scheduled only about 30 hours a week stocking shelves at a Safeway supermarket on the overnight shift.

Proctor, a Vietnam-era Army veteran, has been employed at Safeway for four years, moving among several stores in the Maryland suburbs of Washington and now in Alexandria, Va., where he stays in Christ House, a transitional housing residence for single men. Life, he admits, is far different than when he worked 15 years as an electrician earning up to $18 an hour and later was a bouncer at a bar earning as much as $500 a night.

The broad-shouldered Proctor landed at the residence run by Catholic Charities of the Diocese of Arlington, Va., 18 months ago when his 25-year marriage dissolved. He moved out of the couple’s comfortable Bethesda, Md., home with little more than clothing.

“I’m one of the few who’s been on top and now at the bottom,” he told Catholic News Service. “So if anybody’s out there who has the same feeling of ‘Hey I’ve got it made,’ don’t count on it because you could be in my situation in a heartbeat.”

Proctor is among the growing number of Americans living in poverty as revealed by U.S. census data. In 2010, 15.1 percent of Americans – 46.2 million people, an all-time high in terms of numbers – were living in poverty, according to statistics released Sept. 13. It was the third straight year poverty rose in the country.

Earning about $11,000 a year and no home to call his own, Proctor said he now holds a different view of the 100 people – primarily poor families and homeless individuals – who visit Christ House every day for a hearty evening meal.

He said he better understands how poor people struggle to make ends meet, often through no fault of their own because of a layoff from a job, an illness or a family misfortune.

Mentesnot Tejeji, resident manager at Christ House, said the number of people at the meal has doubled since he joined the staff in 2007.

“We’re starting to see new faces. This might be the direct result of the recession,” he said.

Tejeji suspects many of the newcomers face the difficult choice of having to pay for rent and utilities or for food.

– The poverty rate among children rose to 22 percent and among adults 18 to 64 years old rose to 13.7 percent; the rate among seniors older than 65 fell to 9 percent.

– The poverty rate among female-headed households swelled to 40.7 percent; for households headed by married couples it rose to 8.8 percent.

– The poverty rate among Hispanics climbed to 26.6 percent, almost the same level among blacks, which stood at 27.4 percent; for whites the poverty rate was 9.9 percent and for Asian-Americans it was 12.1 percent.

– Between 2007 and 2010, the number of people “doubling up” with friends because of a loss of housing rose 10.7 percent. The number of young adults 25 to 34 years old living with their parents rose by 25.5 percent in the same period.

The growing poverty points to the serious challenges facing Congress and President Barack Obama as they debate differing visions over a how to stimulate the economy so that businesses will create jobs.

Charles A. Gallagher, chairman of the sociology and criminal justice department at LaSalle University in Philadelphia, sees worsening poverty ahead unless any new jobs created offer a living wage and good benefits. He fears that the American Dream will be unreachable for millions of Americans faced with the prospect of working in low-wage jobs.

“If people don’t go back to work, there’s not going to be money out there in the community,” Bishop Blaire said. “To me it’s a very simple matter.”

He called upon Congress and the White House to “set aside the political stalemate that keeps people from working together.”

“We have to keep people first,” Bishop Blaire said. “I don’t have the answers for what government can do and I don’t think that’s even our role as a church. Our role is to say the government needs to accept its responsibility. But it’s not just the government, businesses, various entities, everybody has a responsibility.”

Meeting in Washington Sept. 13-14, the Administrative Committee of the U.S. Conference of Catholic Bishops asked Archbishop Timothy M. Dolan of New York, USCCB president, to ask bishops “to support our people and to encourage all the different leaders and institutions in our society to work together to put people to work,” according to Bishop Blaire.

“The church has to keep saying over and over again that the economy, everything we do, is for the common good of all the people and your institutions and individuals have responsibilities.”