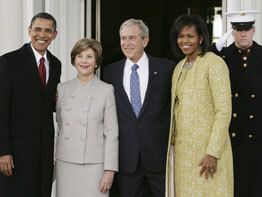 They set out from Emmitsburg before dawn to catch a train to watch history as it happened.

Never mind that they figured to be standing a dozen or so football fields from Barack Obama when he took the presidential oath of office, or the likelihood that they might catch him only on gigantic video screens on The Mall in Washington, D.C.

The 10 Mount St. Mary’s University students and faculty members just had to be there Jan. 20, for the inauguration of the nation’s first African-American president.

“I definitely would not miss it; history-making is putting it mildly,” said Beth Kitchin, a senior political science and history major who traveled by MARC train. “It’s really about just being there and showing support for the change, the promise. It’s such an amazing step forward. I just want to be a part of it.”

That spirit took hold at New All Saints in Liberty Heights, where some 45 people were to board a bus the evening of Jan. 19 to head to Washington for the inauguration. The group was to stay at Our Lady of Perpetual Help Church in Southeast Washington, before a morning prayer pilgrimage to see the new president sworn in.

“We’re going to pray him in, and pray that real change happens,” said Howard Roberts, retreat coordinator for Harambee, a network of predominantly African-American Baltimore parishes that arranged the trip and a Jan. 19 Mass at New All Saints honoring Dr. Martin Luther King Jr.

Pope Benedict XVI, in a Jan. 20 telegram, congratulated President Obama on his inauguration and told him that he prayed God would “grant you unfailing wisdom and strength in the exercise of your high responsibilities.”

Archbishop Edwin F. O’Brien asked parishes and schools in the archdiocese to ring their bells at noon on inauguration day – and Jan. 22, to mark the 36th annual March for Life in Washington.

“I hope his (President Obama’s) judgment will benefit the common good – not just for the economic situation, but for the morality of respecting life in all its stages,” Archbishop O’Brien said a few days beforehand.

Father Raymond Harris, formerly a Mount St. Mary’s chaplain and assistant pastor at several Baltimore parishes, is praying President Obama will change his position on abortion. He also remembers that his own parents and grandparents endured segregation because they were black.

“On one hand,” said Father Harris, who is studying for a licentiate in canon law at the Catholic University of America, “we should acknowledge the historic nature of this occasion. Scripture invites us to pray for our leaders.

“On the other hand, we must continue to be fervent advocates of pro-life, fighting proposals like the Freedom of Choice Act, which is truly an infringement on the fundamental civil right to be born and the right of the Church to minister to the poor, infirm and the sick.”

Schools planned to mark Inauguration Day with prayers, door-decoration competitions, red-white-and-blue clothing, essay contests and lessons based on the inauguration.

Some students at St. Frances Academy, one of a handful of Catholic schools in the archdiocese to close inauguration day, planned to watch the ceremony on a video screen at the Reginald F. Lewis Museum of Maryland African American History & Culture.

“I could feel and hear the roar of the crowd,” said Father Lawrence, who expected to miss the swearing-in, to celebrate noon Mass Jan. 20. He looked forward to hearing President Obama’s inaugural speech.

“It’s going to be something I hope will be very memorable,” Father Lawrence said.

George Matysek, Matt Palmer and The Catholic News Service contributed to this article.