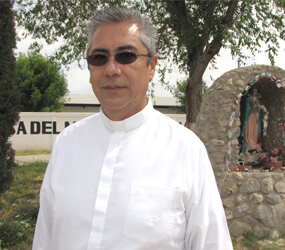 CIUDAD JUAREZ, Mexico – The Ciudad Juarez Migrant Shelter used to fill beyond capacity on the days that U.S. officials would send deportees back across the Rio Grande.

However, the shelter has often been empty since early March. That is when the U.S. government stopped discharging large numbers of deportees into Ciudad Juarez, where a turf war between drug cartels and their affiliated gangs has claimed at least 750 lives this year.

But the shelter director, Dominican Brother Gerardo Arias, and others working with migrants say that even with the rampant violence, discharging deportees into Ciudad Juarez is not an entirely foolish proposition – especially since other ports of entry to the southeast such as Nuevo Laredo, Reynosa and Matamoros can be more dangerous for migrants.

“In many ways, Juarez is a safe city for migrants,” said Brother Arias, director of the Ciudad Juarez Migrant Shelter. In his city, he added, criminal gangs are not kidnapping and extorting migrants.

The March decision to stop discharging so many deportees into Ciudad Juarez was meant to spare migrants any exposure to the ongoing violence, but it came after intense lobbying from the municipal government and Mexican officials.

Ciudad Juarez Mayor Jose Reyes Ferriz blamed the influx of deportees – many of whom had been in U.S. prisons – for aggravating the city’s crime problem by ending up in either one of the warring cartels or the gangs carrying out such crimes as extortion, robberies and kidnappings.

“Previously Ciudad Juarez was the destination for all those leaving (U.S.) prisons,” said Mauricio Rodriguez, spokesman for the Ciudad Juarez municipal government.

Rodriguez was unable to say if the crime rate had diminished since deportations were scaled back.

Reyes told reporters in late March that the number of deportees fell by 80 percent to as few as 6 per day – mostly migrants caught trying to pass into El Paso without the proper documents.

Organizations working with deportees and migrants in Ciudad Juarez reject claims from the municipal government that those being sent back to Mexico join gangs in especially large numbers. Brother Arias said most of the deportees with U.S. criminal records were sent back for nonviolent crimes such as illegally entering the United States or driving without a license.

However, he agreed with the mayor that an influx of returning migrants had been straining resources.

Others working with migrants say the city – despite the violence – has an established migrant-support infrastructure such as shelters, while a municipal program would provide those anxious to leave the city with money to travel home.

“The federal government has said it wants to have safe and orderly deportations for the young migrants,” said Diana Rodriguez, director of a human rights center affiliated with the shelter.

“We definitely don’t believe that they’re doing it securely or orderly if they’re sending (migrants) to other border crossings that are just as dangerous or worse than here,” she said.

Rodriguez cited the border crossing at Ojinaga, Mexico – which borders Presidio, near the Big Bend region of Texas – as a municipality that lacks a migrant shelter and other services, although it is receiving deportees.

Further east, in Nuevo Laredo, Father Gianantonio Baggio, director of the Nazareth Migrant Shelter, has noticed a change in the type of migrants passing through northeastern Mexico.

Father Baggio said his shelter now serves a diminishing number of Central American migrants – who are avoiding northeastern Mexico because of the rampant kidnappings and violence – while the number of deportees has doubled over the past two months.

“The dangers of the journey (north) and the border have increased,” Father Baggio said.

The northeastern border region of Mexico “is just as dangerous” as Ciudad Juarez, he added.

Father Baggio said the Mexican and local governments have attempted to make deportations safer in his part of the country by having more deportees quickly transported away from the border region to either their hometowns or the north-central city of San Luis Potosi, a nine-hour drive south of Nuevo Laredo.

“This help a lot,” Father Baggio said, but he added, “there isn’t enough money” to return all the migrants to their hometowns.