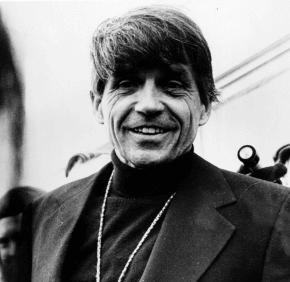 ezygmont@CatholicReview.org
Jesuit Father Daniel Berrigan, who died April 30 at 94, will be remembered most for his prominent role in opposing the Vietnam War.

In “First and Forever, the Archdiocese of Baltimore, A People’s History,” Rafael Alvarez recounted Father Berrigan’s arrest on May 17, 1968, as one of the “Catonsville Nine,” after “breaking into a Catonsville draft board, removing records, and setting them on fire on the parking lot outside before reporters and other witnesses.”

Also among the Catonsville Nine was Father Berrigan’s younger brother, Philip, then a Josephite priest and veteran of the Battle of the Bulge. The nine were arrested and sentenced to prison.

Brendan Walsh of Viva House, a Catholic Worker House and soup kitchen in West Baltimore, was closely associated with Father Berrigan at that time. He said that the fire that consumed the draft cards was a Catholic symbol of purification, and he emphasized that the action was non-violent.

Walsh first met Father Berrigan in 1962, his junior year at LeMoyne College in Syracuse, where he took the priest’s Christology class.

“It would be the first time I ever actually heard the Gospel preached and acted upon,” Walsh remembered, adding that it was through Father Berrigan that he got to know Dorothy Day and the Catholic Worker Movement.

In October of 1968, Father Berrigan testified before the U.S. District Court in Baltimore that he had participated because he had realized “one simply cannot announce the Gospel from his pedestal … when he was not down there sharing the risks and burdens and the anguish of his students.”

Father Berrigan by no means limited his activism to the Vietnam War. In 1980, he and a small group, which again included his brother, launched the Plowshares Movement, which to this day advocates against nuclear weapons and for pacifism.

On Sept. 9, 1980, the Berrigan brothers and six others were arrested after entering the General Electric missile plant in King of Prussia, Pa., and battering intercontinental ballistic missile nose cones with hammers and pouring blood over classified defense plans.

The movement took its name from a passage in the Book of Isaiah in which the prophet describes an end to warfare:

“They shall beat their swords into plowshares and their spears into pruning hooks; One nation shall not raise the sword against another, nor shall they train for war again” (Is 2:4).

Father Berrigan was known to speak against all forms of violence, including murder and abortion.

In a 1984 article in the Milwaukee Sentinel, sourced by Wikipedia, he was reported to have said that while society had seemingly adopted a “theory of allowable murder,” life is “sacred and untouchable at every point,” and he pointed out the inconsistency in advocating for the pro-life cause while tolerating nuclear proliferation, or in speaking against that proliferation while ignoring the death toll of abortion.

“And we are so aware of all he did and all he was and all he created in almost 95 years of life lived with enthusiasm, commitment, seriousness and almost holy humor.”

In addition to his activism, Father Berrigan had a long academic career, which included serving at Fordham University, Cornell University and other institutions.

A prolific writer, he was the author of more than 16 books of poetry and essays.

He made a brief appearance alongside Jeremy Irons and Robert DeNiro in the 1986 film, “The Mission,” a tale of Jesuit missionaries in 18th-century South America.

Born in Minnesota in 1921, Father Berrigan was ordained to the priesthood in 1952. He delivered the homily at his brother Philip’s funeral Mass in 2002 at St. Peter Claver in Baltimore in 2002, where Philip Berrigan had once ministered as a priest.

Later in life, Father Berrigan ministered to people with AIDS in New York City, and in 2012, he visited Zuccotti Park in New York to support the Occupy Wall Street movement.

A funeral Mass for Father Berrigan was planned for May 6 at 10 a.m. at St. Francis Xavier Church in New York.