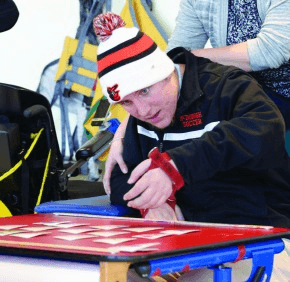 By Erik Zygmont
ezygmont@CatholicReview.org
As his mother and various therapists discussed schedules at the Kennedy Krieger Institute’s International Center for Spinal Cord Injury, 17-year-old Archer Senft moved his hand ever so slightly.
His mother, Louise Phipps Senft, noticed immediately.
“Are you doing that right now?” she asked.
Archer, who is paralyzed, responded with a cool nod.
His hands had wielded everything from lacrosse sticks to art supplies, conduits of the power and coordination of his body as well as the intricacies from his mind’s eye.
Behind the griddle at the Beach Club of Cape May, N.J., the same hands held spatulas and tongs, handling up to 66 pieces of bacon at the same time, a personal best.
It was during a break from that summer job – right after the lunch rush on Aug. 5, 2015 – that Archer went into the ocean to cool off and dove into a sandbar.
He broke his C5 vertebra and is now a quadriplegic, though he has limited use of his arms. Archer and his family have not succumbed to despair over his condition, nor are they accepting it as final.

An inspiration to his family and friends, Archer Senft, 17, prepares for a rigorous physical therapy session at the Kennedy Krieger Institute in Baltimore. (Kevin J. Parks/CR Staff)

“I think we’re doing really well, all things considered,” said Deacon William Senft, Archer’s father, who serves the Cathedral of Mary Our Queen in Homeland, the family’s parish. “There’s been a lot to process, but it’s not overwhelming us, although it did for a little while in the beginning.”
Archer has only been home for a couple months, but he is a familiar face at the School of the Cathedral, where he completed the eighth grade in 2013. All five of the Senft children have attended the school.
“The kids at the Cathedral school have been so supportive of Archer,” Deacon Senft said. “He’s been to a couple of events there, including their school Masses on Thursdays and a school play his brother was in.”
Archer attends classes at both the McDonogh School in Owings Mills, his high school before the accident, and now the Baltimore Polytechnic Institute. A demanding schedule includes AP courses in calculus, English and U.S. history as well as independent study in art. He has physical or occupational therapy Monday through Friday.
“I’m busy for about 10 hours every day with school and therapy, and that doesn’t include homework,” he said.
Archer does it all on less than optimal sleep, as he must be turned during the night to prevent bedsores.
“I usually have a cup of coffee in the morning,” he shrugged.
“To my chagrin,” Louise put in with a wry smile.
She fastidiously collects every available piece of information pertinent to her son’s well-being, going so far as to obtain all his charts from medical staff.
The family’s efforts are focused as much in the spiritual realm as the temporal. Countless prayers have been raised on Archer’s behalf, and he believes they are working.
Support surrounds Archer Senft, including his parents, Deacon William and Louise Phipps Senft, left and third from left, respectively; siblings Paula, Dewey, Pete and Dutch; and Megan Pruitt, Pete’s girlfriend. Pete’s dog, Maverick, is on Archer’s lap. (Courtesy Senft Family)
“I think God has definitely been a big part of my recovery,” he said.
“The family’s faith has just been bedrock in how they’ve dealt with this,” said Monsignor Richard W. Woy, cathedral rector. “I just can’t say enough for Bill and Louise, their care for Archer, and for their other children who have been affected by Archer’s accident.”
Archer, Monsignor Woy observed, is “determined to really achieve his God-given potential, even though his injury has placed some limits on him.”
Louise said that the family’s spiritual support has come from all over.
“I really believe everyone’s collective thinking about Archer has created an energy field for the Holy Spirit to work in,” she said. “We need each other; we really, really do.”
Louise dubbed Archer’s continuing recovery a “creative miracle,” perhaps most evidenced by his breathing without the aid of a ventilator, a feat first achieved in January.
“They called him a ‘ventilator failure,’ ” she said. “He was no ventilator failure, thanks to everyone’s prayers.”
“To breathe on my own is definitely a big independence factor,” Archer said. “I can actually go around without having two people follow me with a ventilator and a suction machine or whatever.
“I really didn’t think I could do it, but the doctors said, ‘You can,’ ” he recalled, words Louise wants all her son’s physicians to use.
“These are the people we find and get on the ‘Archer Strong’ team,” she said. “Maybe they don’t believe exactly in miracles, but they believe in extraordinary things happening.”
Resuming creative work has been another coup for Archer. Before his accident, he was a standout lacrosse player and created visual arts with graphite and acrylic paints. Now, he can clench a writing instrument in his fist and move his arms with his biceps. There’s not enough control to achieve the level of detail he once did, but there’s enough to use a stylus and tablet.
“We really just have strong faith that good will come from this,” Deacon Senft said, “and that God is looking out for Archer and our family, and that all these prayers that people are offering are being answered every moment of every day.”

While Archer Senft, his family and friends are doing everything humanly possible to further his recovery, they are open to divine help. The teen’s accident occurred on the anniversary of the death of a heroically virtuous Italian priest, Father Pio Bruno Lanteri (1759-1830), and many are praying for the association to go further – that Father Lanteri would intercede for Archer.

“The miracle would not only serve Archer, but would also bless Venerable Bruno with beatification,” explained Father Timothy Gallagher of the Oblates of the Virgin Mary, the religious order established by Father Lanteri in 1826.

The title “venerable” recognizes Father Lanteri’s extraordinary virtue; a Vatican-verified miracle would designate him “blessed,” one step from sainthood.

Father Gallagher, who authored a biography of Father Lanteri, said that the priest’s mode of spirituality is well-suited to Archer’s cause. “His was very much a message of the mercy of God,” he said, adding that the concept of being able to “begin again,” over and over, “gave an awful lot of people a lot of hope.”

Diane Beliveau, a parishioner of St. Mary in Annapolis, said she discovered the connection after eucharistic adoration at the Church of the Immaculate Conception in Towson. She said the names of Archer and his mother, Louise Phipps Senft, “crossed her heart,” as did a desire to research the founder of the Oblates of the Virgin Mary. Once she discovered the common date, she said, “I got chills all over.”

She has made prayer cards, which include prayers to ask Father Lanteri to intercede on Archer’s behalf. Email cdkuhler@gmail.com for information.

Father Gallagher will speak about Father Lanteri at The Catholic Business Network of Baltimore’s annual dinner, May 12 at the Hunt Valley Inn. Click here for more information.