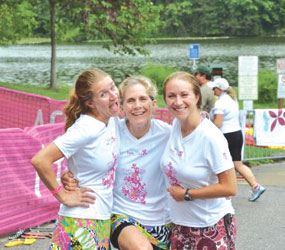 Kay Carney and her husband Jay McCutcheon started Active Survivors Network out of sheer necessity. While McCutcheon was training to do the 2001 Ironman Lake Placid competition, he suffered a stroke at just 38 years old.

“As he started to recover and wanted to get back to working out, it was hard to find a physician to help guide him – or even say it was okay,” said Carney. “We were frustrated. We went to stroke support groups, and they were all people in their 70s. He wasn’t seeing anyone like him. He was a professional athlete. He didn’t have a clear idea of how to get back to that.”

The couple started a group for people who have come back from a debilitating disease.

“Most groups are condition or disease-specific, but ASN is for anyone. Our common denominator is physical activity,” said Carney. “Survivors who work out are stronger, fitter and their weight is better. And they are better able to manage the disease.”

ASN, a non-profit which started out as an Internet support group, connects people whose lives have been affected by serious illness, disease and accidents with the support and resources they need to remain active. The group also heightens public awareness of survivor disabilities through advocacy and education.

Each June, they host a race called the Survivor Harbor 7, where the online community can come together to walk, run or wheelchair.

On his own road to recovery, McCutcheon would often get dizzy while swimming. Doctors explained that physical activity could act as physical therapy for the brain.

“If you are continually willing to challenge yourself within a safe environment, you will challenge your brain in different ways and you can continue to improve,” said Carney, who believes that exercise helped her husband, who played professional soccer in Chicago and Baltimore, recover from his stroke more quickly.

“At six months, a doctor told Jay, ‘You’ve regained everything from your stroke that you will.’ We refused to believe that. I saw him improve over a three- to four-year period,” she said. “He did a marathon less than two years after his stroke. His balance is compromised, but he is still a runner.”

ASN recently began a Fitness for Survivors program at the Maryland Athletic Club (MAC), where Carney has been a trainer for the last 10 years. They have created programs for multiple sclerosis, breast cancer and post-cancer patients. Benefits include improved stamina, weight control and understanding of the benefits of physical activity, including improved mental cognition, mood and overall health.

Team ASN, sponsored by MAC, raises funds to deliver affordable fitness programs to survivors. Its 25 members – all women, including several survivors – range in age from 25 to 62. All competed in the Iron Girl Columbia Triathlon in August, raising more than $25,000 for ASN.

Team member Valerie Kent, a parishioner of St. Brigid in Canton and an event coordinator at Mercy Hospital, was introduced to ASN at the MAC, where she is a member.

“I thought this was a great opportunity to support a local organization,” said Kent. “Our team did great in the Iron Girl. Everybody was really happy with their times. We’re looking forward to doing it again for ASN.”

Fitness for Survivors programs are offered at the MAC Harbor East and Timonium locations. For more information, Carney at kay@activesurvivor.org or 410-823-0562, or go to www.activesurvivor.org.