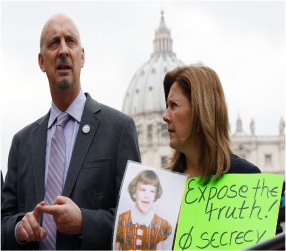 ROME – Four victims of clergy sex abuse came from the United States to Rome to call on the Vatican and Pope Benedict XVI to “break down the walls of secrecy” and to seek harsher, universal measures in dealing with clergy accused of the sexual abuse of minors.

Included in those rules, they said, should be that any priest or religious who has been found guilty of rape, molestation or abuse of children be removed immediately from the priesthood and that bishops in every country should cooperate with civil authorities and turn over all information they have concerning crimes by priests to police.

The Vatican needs to establish stricter measures that would be put into immediate effect for churches around the world so that “no parish, no community, no boarding school on this planet has to ever be concerned that the priest in their parish … has raped or assaulted a child,” said Peter Isley of the Survivors’ Network of those Abused by Priests.

Isley and three other members of SNAP held an outdoor press event March 25 just a few yards from the colonnade of St. Peter’s Square.

After the victims spent an hour talking with reporters, police intervened and took the four activists to a nearby police station. They were released a few hours later and, according to The Associated Press, a judge was to decide whether they would be charged for not having a permit for their outdoor gathering.

The founder and president of SNAP, Barbara Blaine, and Barbara Dorris, John Pilmaier and Isley held up pictures of themselves as children and pictures of Cardinal Joseph Ratzinger, now Pope Benedict, who from 1982 to 2005 headed the Congregation for the Doctrine of the Faith, the Vatican office that took over juridical control of sex abuse accusations in 2001.

Isley told reporters during the gathering, “We want Pope Benedict to break down this wall of secrecy which has caused so much damage and harm in our church and to open up the files so that we can see exactly how he’s been handling these cases.”

Blaine said the files should be handed over to the police because the information represents criminal evidence, and civil authorities are better equipped and have the authority to investigate such crimes.

“The church should not be investigating sex crimes any more than the police should be telling the pope how to prepare his homily for Easter Sunday,” she said.

Vatican officials have underlined in recent weeks that the church conducts an ecclesiastical investigation separate from a criminal investigation of sexual abuse allegations. The Vatican has encouraged bishops to comply with local civil laws when it comes to reporting accusations of sex abuse by priests.

Blaine, who was abused as a child in Toledo, Ohio, by a priest who had already been reported to his superiors as having abused minors, said that one way the church can better protect children is “to immediately reveal the identities of all the predator priests in the world so that parents can be put on notice.”

“We believe the pope now more than ever needs to speak up and tell all the bishops across the globe that they should reveal their names of all the sexual predator priests. He should ensure that all predator priests are removed from ministry today. And he should encourage anyone with information to report that information to the police in whatever country they live,” she said.

Isley said universal norms are imperative since the sexual abuse of minors by religious in not a problem affecting only one or a few countries.

“This is a global problem” that has to be dealt with, he said.

The press gathering in Rome was just one of a number of stops Blaine and Dorris were making on a brief tour of Europe.

The first leg of their journey included meeting with victims abused by clergy in Germany and Austria and speaking with three members of the German parliament in an effort to urge civil authorities to launch their own investigations into claims of priestly sex abuse.

The two SNAP members were set to meet with other victims of sex abuse by clergy in the Netherlands before returning to the United States.