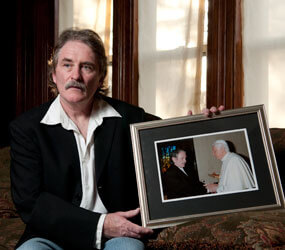 WASHINGTON – Two survivors of clergy sexual abuse who met with Pope Benedict XVI during his 2008 visit to Washington are planning to take their pleas for greater recognition of the spiritual, pastoral and mental health needs of abuse victims to the doorstep of the Vatican Oct. 31.

Olan Horne of Westfield, Mass., and Bernie McDaid of Peabody, Mass., told Catholic News Service they are planning a gathering that they hope will bring thousands of abuse victims to St. Peter’s Square for a “Reformation Day.”

Both men said the effort stems from a building frustration in dealing with church officials on the needs of abuse victims.

The date is significant because, they said, the day is observed as a day of reformation in some cultures.

“The victims of these crimes have never really been heard correctly or had their day or voice,” McDaid said. “It’s always been overdubbed or behind the church, the lawsuits, the lawyers, talk of Catholic reform, etc., etc., etc.

“Not that any of these issues are not important, it’s just that the victims have been on the side and hurt by the politics,” he said.

In planning for the gathering, Horne and McDaid met via teleconference April 20 with representatives of several groups working on a variety of fronts regarding transparency, church finances, church decision-making and clergy sexual abuse to build support for the October gathering.

The men explained that they also are contacting priestly abuse victims worldwide to encourage them to travel to the Vatican. McDaid said he is especially working with victims in Ireland and Germany, where the church’s handling of abuse cases has been widely reported on and criticized.

Vatican authorities have emphasized that it was the pope who, as Cardinal Joseph Ratzinger, pushed for harsher measures against abusers and made it easier for the church to defrock them. During his recent trip to Malta, Pope Benedict, in a meeting with eight abuse victims, promised them the church would do “all in its power” to bring offenders to justice and protect children.

“Reformation Day is a chance for these victims, survivors and their loved ones and all good priests who know in their heart that it’s time for change to stand with us in St. Peter’s Square on this beautiful day of healing,” McDaid told CNS.

“If you have the square filled with survivors, mostly men, united in this one place in that one moment, standing up for themselves, this is a healing moment,” said McDaid, one of numerous youngsters abused in the 1960s and 1970s by then-Father Joseph Birmingham, who once served as a priest in the Boston Archdiocese and since has been laicized.

Both men told CNS they feel the church has failed to adequately involve abuse survivors in efforts to help change the way the church responds to abuse allegations.

Horne cited, in particular, the fact that there is no permanent representation by abuse survivors on the 13-member National Review Board, which advises the bishops’ Committee for the Protection of Children and Young People on matters of child and youth protection.

“There needs to be a survivor’s viewpoint. That has been effectively missing across the country and elsewhere in Europe,” Horne said.

Teresa Kettelkamp, executive director of the bishops’ Secretariat of Child and Youth Protection, said that no known abuse victims currently serve on the National Review Board, but at least two past members were victims of sexual abuse.

“The board works real hard to get the expertise needed,” Kettelkamp told CNS.

“Just being abused, as tragic as that may be, may not be the best criteria to choose a member of the National Review Board,” she said.

“I do think victims’ consideration is being very compassionately considered,” Kettelkamp explained. “The board has a very strong desire to make sure the victims are heard, their needs are met and the (“Charter for the Protection of Children and Young People”) is implemented in such a way that the needs of victims are met.”

Merz told CNS that the board is a group of “people who bring some expertise to the problem, whether or not personally victimized.”

“It’s important to have a lot of perspectives on victims rather than a person whose job is to represent victims in general or a particular organization of victims,” he said. “That changes the perspective of a generalist board.”

Horne also was abused by Birmingham after he was transferred by Boston archdiocesan officials from McDaid’s parish to his own. He complimented the bishops for taking steps to implement an annual audit to verify the compliance of dioceses with the norms implemented in 2002 for handling abuse reports and for introducing safe practices programs in schools and church organizations.

“They are doing some work, but what they are blindly missing is that they need to do some work for survivors,” he said. “They’ve given us a check (as compensation for wrongdoing), but nothing else.”

The planned October gathering comes two and a half years after the two men and three other abuse victims met with Pope Benedict at the papal nuncio’s residence in Washington. Afterward, Horne and McDaid pledged to hold the pope’s “feet to the fire” to ensure a better response from the church to the needs of abuse victims.

“We’re calling on everybody, people in the pews, priests … who know in their hearts the church is in dire need of change,” Horne said.

“This is not an attack on the Catholic Church. We’re asking the church to join us,” Horne said.

In fact, Horne and McDaid are hoping Pope Benedict will join the gathering as a way to show his support for clergy abuse victims globally.

The men said they want the church to broadcast the event to parishes worldwide to acknowledge its support for the needs of abuse victims.

“We’re going to forward with this whether the Vatican agrees with us or not,” Horne added. “Nobody can deny the size and magnitude of the issue any more.”