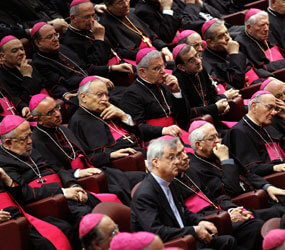 VATICAN CITY – The scandal of clerical abuse of minors must inspire bishops and priests to rediscover the need for penitence, purification, forgiveness and justice, Pope Benedict XVI told Italian bishops.

The church’s desire to engage in a new evangelization of the world “does not hide the wounds scarring the church community, (wounds) caused by the weakness and sin of some of its members,” he said in an audience with members of the Italian bishops’ conference May 27.

While the pope did not specifically mention the crisis of sex abuse in the church, he briefly referred to it in his 20-minute speech to the bishops, who were holding their general assembly in the Vatican synod hall May 24-28.

The pope said the Year for Priests, which closes with a Mass June 11, has served as a reminder for the need for deep spiritual renewal within the priesthood.

The “humble and painful admission” of the sins of some of the church’s members should not obscure the good and saintliness of so many others, including lay faithful and priests, he said.

“That which is cause for scandal must translate for us into a reminder of the ‘profound need to relearn penance, to accept purification, to learn on the one hand forgiveness but also the necessity of justice,’“ he said, repeating remarks he made to journalists aboard the papal plane to Portugal May 11 in reference to the clerical sex abuse scandal.

As bishops’ conferences across Europe are coming to grips with the sex abuse crisis, the Italian bishops’ conference revealed for the first time that about 100 cases of alleged abuse had been handled by Italian church courts in the past decade.

“In general and factual terms, there are about 100 cases relative to canonical procedures carried out during the last 10 years,” said Bishop Mariano Crociata, general secretary of the Italian bishops.

Responding to journalists’ questions May 25, Bishop Crociata did not respond to queries about the number of cases that ended in a guilty verdict or how many were turned over to the police.

In his opening remarks to the general assembly, Cardinal Angelo Bagnasco of Genoa, president of the Italian bishops’ conference, said that “a person who abuses minors needs to be concurrently brought to justice and receive treatment and mercy.”

Cardinal Bagnasco said the church has never sought to underestimate the severity of the sex abuse crisis and called on families “to recognize that we, the church, will do everything to always, and increasingly, merit their trust.”

The bishops’ meeting came just as three priests were facing accusations by civil authorities for the sexual abuse of minors. A 73-year-old priest of the Diocese of Lodi was arrested May 25 on charges of sex with a minor, and a priest in Savona went on trial May 24 for allegedly sexually violating a young girl.

In late May at the trial of a Rome priest accused of sexual violence against seven boys, the current bishop of Porto-Santa Rufina, who was the accused priest’s pastor, said that although he received complaints about the priest, he did not tell the Vatican because he did not think there was sufficient proof. He said he did not tell Italian police because he was not sure about the procedures to follow. It was another parish priest who reported the alleged offender to Italian authorities.

The promoter of justice in the Congregation for the Doctrine of the Faith, Monsignor Charles Scicluna, said in mid-March that in Italy, “the phenomenon (of priestly sexual abuse of minors) does not seem to have dramatic proportions, although what worries me is a certain culture of silence, which I feel is still too widespread in the country.”