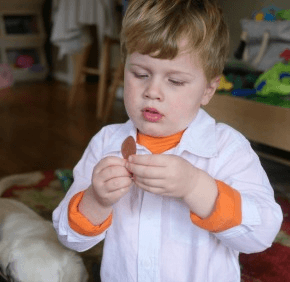 By Jennifer Williams
jwilliams@catholicreview.org
FINKSBURG – Her legs tucked beneath her as she sat on a couch and watched her 3-year-old son play, Katie Mays vowed that never again would she be “sweating anything small.”
Ironically, the reason for her new outlook started with something very small – a penny.
On her family’s first trip to the National Aquarium in Baltimore on Feb. 20, her son, Liam, received a souvenir penny as a gift from his Uncle Hank.
After showing off the new penny, which is shaped like a football and features two Atlantic Bottlenose dolphins, Liam turned to his mother with a frightened look on his face.
“Liam, did you put the penny in your mouth?” asked Mays, a 31-year-old wife and mother of two who attends Sacred Heart Church in Glyndon. “Did you swallow it?”
The child nodded, and despite a frantic search and promises of candy if he just gave them the penny, the elusive coin was nowhere to be found.
After searching Liam’s stool for the next several days and conducting a stomach X-ray, there was still no sign of the penny. Mays and her family doctor were insistent on a chest X-ray as well, due to the oblong shape of the coin. The chest X-ray did not yield a glimpse of the coin, but it did reveal something much more significant.
Liam had a large mass on his left lung, the size of his fist. The doctor thought it could be pneumonia, or possibly a tumor. When it didn’t shrink with antibiotics, the doctor confirmed what Mays already knew deep down. It was cancer, likely from the neuroblastoma family.
Still reeling from the news that her son needed surgery to remove the tumor, Mays was straightening the toys at home when in the bottom of the toy box, she discovered the penny.
A relative told her that the dolphin is a symbol of protection.
Liam was treated by top doctors at the Johns Hopkins Hospital, but Mays is also thankful for the volume of people praying for her son.
“My grandmother called and told me he was on a prayer request list in Ireland and my mom’s friend went to Emmitsburg and brought back holy water,” said Mays, who doused her son with it when nobody was looking. “My mom always talks about the power of prayer. It was overwhelming how many people were praying for him.”
The power of prayer wasn’t the only thing Mays experienced. Her grandfather, whom she called Poppy, died March 8, 2013. He and Mays were “very, very close.” During a particularly rough night at the hospital, when Mays hadn’t slept in days, she was sitting in a regular, non-rocking chair crying, when she felt as though she was being rocked to sleep.
“And I just knew that Poppy was there and soothing me and comforting me,” said Mays. “I know he is Liam’s guardian angel.”
Although the surgery went well and the tumor was removed with only a six-inch incision and the use of a camera, Liam did not come out of sedation and wasn’t responding as soon as he should have.
While sitting with his son in recovery, Sam Mays said, “tell you what, when we get done with this, let’s get him that puppy he wants.”
Liam smiled in response.
“That’s how we got him to wake up,” Mays said, with a chuckle.

So on March 14, the family brought home a wriggly, white English Labrador retriever puppy, which they appropriately named “Penny.”

Although she sometimes likes to gnaw on Liam’s action figures instead of her bone, the pair seem to get along fine.
Liam was diagnosed with ganglioneuroblastoma, which is extremely rare, affecting fewer than five out of 1 million children, according to an article on MedlinePlus. His prognosis is good, according to Mays.
He will continue to be monitored as he begins a normal lifestyle again.
For now, he seems as active as ever, playing with Ninja Turtle figurines, eating Skittles and Sour Patch Kids, and playing hide and seek.
Mays said her grandmother recently moved into the Charlestown Retirement Community in Catonsville, and she plans to take Liam to visit and attend Mass at Our Lady of the Angels.
Mays, who recently cut off nine inches of her hair and donated it to children with cancer, plans to volunteer with children who have cancer once her own children are in school. She says when she tells Liam’s story, especially because he didn’t even swallow the penny, it seems made up.
“It’s unreal,” she said. “It’s a miracle. I’m just so thankful that he’s OK and going to be OK. It definitely gives me a lot more faith than I had before. I know that this didn’t just happen.”

Katie, Molly and Liam Mays, with their dog, Penny, pose during playtime March 25 at the Mays residence in Finksburg. (Karen Osborne | CR Staff)

Also see:‘Priest for a day’ is dream come true for 11-year-old Missouri boy

Want your son to be a Distinctive Scholar? Consider the name Nicholas My uncle the saint: Highlandtown pastor has heavenly connection