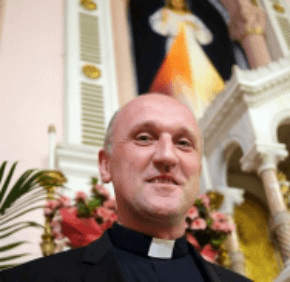 By Erik Zygmont
ezygmont@CatholicReview.org
Twitter @ReviewErik
“Paint an image according to the pattern you see, with the signature: Jesus I trust in You.”
So said Jesus Christ on Feb. 22, 1931, in a vision to St. Faustina Kowalska, a young Polish nun.
Jesus asked St. Faustina to have him painted as he appeared in her vision – dressed in white, with his left hand held near his heart, emanating red and white rays.
Would any artist of sound mind take such an assignment lightly?
Polish artist Ewa Mika, who was asked to paint the image for Holy Rosary in Baltimore, certainly did not.
“I never do the painting of Divine Mercy because that is so, so difficult for me,” she initially replied, according to Society of Christ Father Andrzej Totzke, pastor of Holy Rosary.
But Jesus had an answer. After St. Faustina herself had wept at the prospect of reducing her Lord to art, he assured her, “Not in the beauty of the color, nor of the brush, lies the greatness of this image, but in My grace.”
Father Totzke said that Mika, too, came around and rose to the task, spending eight months conducting research, reading St. Faustina’s diary and interviewing those familiar with the nun and her visions.

“She did this painting exactly according to the directions given by Jesus Christ to St. Faustina in her diary,” Father Totzke said.

Mika also finished the image – known to Catholics worldwide as the Divine Mercy image – on time to be dedicated on Divine Mercy Sunday – always the first Sunday after Easter. Holy Rosary will celebrate Divine Mercy Sunday April 12 with the sacrament of reconciliation, beginning at noon, followed by a bilingual (English and Polish) Mass celebrated by Bishop Denis J. Madden at 1:30 p.m. After the Mass, starting at 3 p.m., the celebration will conclude with eucharistic adoration, singing of the Chaplet of the Divine Mercy, and veneration of the new Divine Mercy image, as well as relics of St. Faustina and St. John Paul II.
“This is the biggest celebration of the year for Holy Rosary,” Father Totzke said.
The parish has a very special connection to Divine Mercy. In 1995, its then-pastor, Father Ronald Pytel, received miraculous healing of a heart condition after much devotion to then-Blessed Faustina and prayer for her intercession. St. John Paul II canonized her in 2000, thanks in part to that miracle. Father Pytel died in 2003 of kidney cancer. Then, she painted.
Father Totzke stressed that Divine Mercy is for all.
“People think this is some kind of Polish devotion,” he said. “No, no, no, no – this is a message for all of us.”
The message, he said, is that God’s mercy can be obtained if requested with complete trust in Jesus. The active component to that, according to Father Totzke, is, “Be merciful to others.”
“Be people who spread the message to others,” he said. “Be active.”
To that end, Holy Rosary created a group, Friends of the Divine Mercy, dedicated to merciful prayer and deeds. Recently, for example, the group collected donations for Catholic Ukrainians coping with the crisis in that country.
Father Totzke advised that St. Faustina’s diary, excerpts of which are available at holyrosarypl.org, can offer readers further understanding of Divine Mercy.
Holy Rosary’s new image will be part of a relocated Divine Mercy shrine that will be near the entrance of the church, to provide easier access. The signature, “Jesus I trust in You,” will be written in multiple languages, including Polish, English, Spanish, Filipino and Vietnamese.
“We want to show that this place is for everyone,” Father Totzke said.