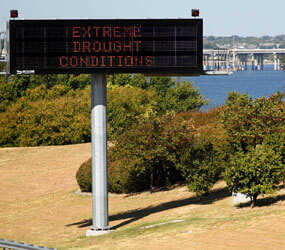 WASHINGTON – There’s a lot of praying for rain going on in the drought-gripped Southwest, but those prayers have yet to be answered.

Most of Texas, and significant portions of New Mexico and Oklahoma, are in a “D4” drought zone as assessed by the U.S. Department of Agriculture. D4 is equal to “exceptional” drought – the most intense level on USDA’s scale.

“The last time there was measurable rain – it might not have been rain, it might have been moisture – it was in February, with snow,” said Lucas Flores, editor of the South Plains Catholic, newspaper of the Diocese of Lubbock, Texas.

“The most noticeable thing is not seeing the green of the cotton right now,” Flores added in an Aug. 10 phone interview with Catholic News Service. “The farmers are watering pretty hard. My dad’s a farmer. … I’ll ask him, ‘Did you get anything today?’ and he’ll say, ‘No we’re still praying.’“

“The last day we had rain here, it was the day of the St. Ann’s Family Fair,” said Jimmy Patterson, communications director for the Diocese of San Angelo, Texas. “I think it was Sept. 22 last year.”

“The wildfires we’re having are related” to the drought, Patterson said. “In the town of Olfen which is near San Angelo, we had a wildfire. It was started when the sun cracked a Coke bottle and the heat from the refracted light set the grass on fire.”

Drought conditions developed rapidly. Just a year ago, nearly 75 percent of a six-state area covering Texas, Oklahoma, Louisiana, Arkansas, Mississippi and Tennessee reported no drought. Also, as recently of Jan. 1, none of this area recorded a D4 drought level. Now, about 47 percent of the region is classified D4.

Southern Georgia and parts of Florida also have been suffering from a lack of rain, but the drought now gripping the Southwest is the most severe. It is both a hydrological drought, affecting water and water tables, and an agricultural drought, affecting crops, grasslands and pastures.

“All of us are praying for rain, but all we see are rain clouds in the distance. We never see any rain,” said Monsignor John Anderson, vicar general for the Diocese of Las Cruces, N.M., adding that on Aug. 9, “I got 10 drops on my windshield. I wouldn’t call it rain.”

Patterson said he was at a rural life Mass in his diocese in July and heard stories from Father Hubert Wade, pastor of St. Mary Star of the Sea Parish in Ballinger, Texas, that typify how severe the drought is.

“He informed me at that time the city of Robert Lee would be out of water this month, right about now,” Patterson told CNS. “I think they have reached some contract to have some water shipped in from other municipalities.”

Patterson said Father Wade also told him about livestock that were in a confined pen on a ranch near Robert Lee when a wildfire came through. “And they couldn’t get out and all of the cattle were burned, but not to death. And the rancher was forced to shoot 150 head of cattle as a way of mercy killing. Another example was deer that went into a brushy area and couldn’t get out and they burned to death.”

“We’re kind of used to heat. I’m not sure about the drought,” said Flores in Lubbock. But the heat is more than enough in some areas.

“In Midland (Texas) earlier this year we set an all-time record of highs over 100 degrees. We set it earlier this summer and this weekend we’re breaking it,” Patterson noted. “We’ve had three days this summer when the low temp at night has been under 70. We’ve had a lot of days when the low hasn’t gotten out of the middle 80s at night.”

Christian Gonzalez, communications director for the Diocese of Austin, Texas, said many areas in the diocese have had bans on burning since Easter. Water-use restrictions for both city dwellers and farmers are in effect in many places in the drought region.

“Lake Spence provides a lot of the diocese with water supplies and it is between 1 and 2 percent full. I actually drove into the lake,” said Patterson of San Angelo.

“It’s as bleak as I’ve seen and I’ve been here since 1988. The last drought was a severe drought. It began in the Fifties and it lasted nearly a decade,” but even then, he added, most areas got a couple of inches of rain each year. “But we’ve had 0.16 inches of rain in Midland since September of 2010,” he noted.

One small positive aspect of the drought happens if farmers have planted the right crops.

“The farmers are getting the chili (peppers) out of the fields,” Monsignor Anderson said. “It’s hot, but for the chili lovers it’s going to be great chili. They love that heat,” and farmers are reporting increases of up to 40 percent for their yields.