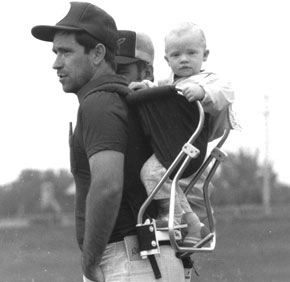 One day your mother is lecturing you for taking your cabin-fever-suffering wife and week-old daughter to the mall for a pizza – hey, White Marsh was a big outing in 1985 – and the next that child is married.

Kate – as in Hepburn, rather than Katie, as in Holmes – always had a mind of her own, which I learned when my wife informed me that we could not raise a family on a sportswriter’s salary. Once done birthing, Mary returned to the workforce, which led to an early parenting heartbreak, a 2-year-old rebelling at joining her baby brother during afternoon nap time.

I craved that sleep. There was a game to cover that night.

Ah, the trouble with redheads.

My Tiger Dad surfaced in the browbeating of a pre-kindergartner into personalizing a valentine for every kid in the classroom. Kate was a precocious writer and reader, but there were days when I wished she had not taken to heart the bumper sticker the kids saw every school day on the lot at St. Francis of Assisi in Mayfield: “Question Authority.”

At a first Communion party for Kate and several of her cousins, guests did not bring gifts, but canned goods for the parish pantry. My 11-year-old altar server volunteered to help at my mother’s funeral, at St. Athanasius – to her a strange parish. Distraught at the sight of that casket coming up the steps in Curtis Bay, Kate found comfort from an unexpected concelebrant, Sulpician Father Joe Bonadio, a friend from our home parish.

Where did the time go? I know where every day was spent, because God blesses us with an abundance of so many memories like that.

On a job interview in early 2008, the first question stopped me: What is your greatest accomplishment? Not trying to score points, I sincerely answered, “Being married 23 years.”

That job went to someone else. God had other plans.

Soon after joining the Catholic Review, I read a commentary that disparaged destination weddings – such as the one Mary and I hosted last weekend, in the Hill Country of Texas.

It was nothing new, as ours is a fascinating family tree. One sister-in-law is Jewish. A nephew, whose paternal grandfather was conscripted into service to fight for Hitler, married a gal from Ghana.

And so our daughter from Baltimore found a guy from Spokane, Wash. We love, and like, Micah. He and Kate made like Solomon, and chose to have both families travel to witness and celebrate their becoming husband and wife.

The accompanying photo was taken at a high school cross country meet, when Kate was still an infant. Even then, she enjoyed venturing out. Before she turned 10, she acted on Center Stage, drawing a paycheck, no less. During a year abroad in college, she spent Christmas with her godmother in Berlin – Germany, not Worcester County – then trained to Budapest, by herself, to bring in the New Year.

Her mother and I have always been proud of that independence.

Now, we are proud that Kate has committed to sharing her life, that her calling includes marriage.

Paul McMullen is managing editor of the Catholic Review.