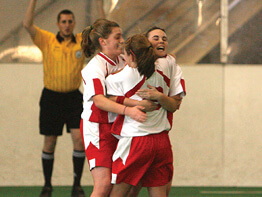 
The Lions, who just moved into the A Conference this past indoor soccer season, posted a respectable regular season record of 7-1-1 and to cap it off, upended five-time defending champion, Institute of Notre Dame, Baltimore, 3-2 in the finals game.
With two big Lion goals coming from senior captain Samatha Voelker and one goal from junior Erin MacPherson, the Lions put together a tenacious effort from start to finish. In tandem with this solid offensive effort, senior goalie Brittany Woytowitz tallied 23 saves in the game, thwarting a valiant effort from the IND Indians.


The Indians finished 9-2-0 on the year, with both losses to Maryvale, each by one goal. In the finals game and throughout the season, the Indians were led by Mara Hauf, Becky Fraser, Sofia Gyftopoulos and goalie Lauren Vetock.


Coming into the finals game to face Maryvale was an IND team saddled with mixed emotions. That morning was the funeral and burial of Michael Woodard, a longtime Baltimore soccer enthusiast, a trusted fixture at the Du Burns Complex for many years and a devoted father to IND freshman player Gillian Woodard. Just 47 years old, Mr Woodard collapsed while jogging, leaving behind four children and his wife. Balancing emotion with desire, the IND team hung tough with goals from Hauf and Gyftopoulos but not enough to turn the tides on the Maryvale team.


“I knew we needed to come out at the start and play hard,” said assistant coach Ben Pardew. “We did just that and it got us the win.”


Maryvale advanced to the championship game by defeating Park School 15-1 in the quarterfinals and Friends School 4-1 in the semifinals just one day before.