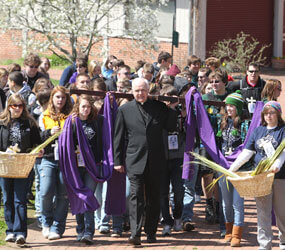 Claire Posey was curious March 27 as 1,400 people filed onto a field at St. Mary’s Spiritual Center and Historical Site for the 17th annual Archdiocesan Youth and Young Adult Pilgrimage.

Posey had heard about the event for years, which has become the Archdiocese of Baltimore’s kickoff to Holy Week, but had not participated. She saw young people holding crosses and dancing to music. Some of them were having their confessions heard by priests, including Archbishop Edwin F. O’Brien.

Posey was ready to be a pilgrim in the streets of Baltimore City.

“I wasn’t sure what to expect,” the 18-year-old Holy Trinity in Glen Burnie parishioner said excitedly. “Now that I’m here, I’m excited.”

During the next eight hours, Posey bonded with the young people of the Catholic Church. Along with Archbishop O’Brien, they carried a large wooden cross as onlookers waved in approval.

The young church was boldly on full display.

Justin Hileman, 17, of St. Bernadette parish in Severn, said the strength to walk the streets came from his peers.

“I was nervous my first year,” Hileman said. “But, everybody’s with you and I think the courage comes. I was yelling the whole time. It’s just going with the flow.”

Elizabeth Cerwonka, 18, of St. Francis of Assisi parish in Fulton, has become a regular attendee and views each one as special.

“It’s really nice to have a large group of people who all believe in the same thing you do,” Cerwonka said. “It’s fun to be in public proclaiming God and feel completely comfortable doing it.”

Pilgrims brought more than $5,000 in gift cards and donated another $220 in checks and cash for Sarah’s House, a Catholic Charities organization.

After a rally at St. Mary’s Spiritual Center, the large group split into two. One went to the Basilica of the National Shrine of the Assumption of the Blessed Virgin Mary for the adoration of the Blessed Sacrament, while the other went to St. Jude Shrine for music by the bilingual group “Who Do You Say I Am.” The two groups switched sites before meeting at War Memorial Park. They then processed, with palms in hand, to O’Donnell Park in Canton for a blessing. Finally, all 1,400 pilgrims moved next door for a Mass celebrated by Archbishop O’Brien at St. Casimir.

The day mixed English and Spanish in all activities. With the number of Latino and Hispanic people increasing in the archdiocese, the Division of Youth and Young Adult Ministry wanted to create a sense of welcome.

Emily Cerna, an American-born Guatemalan, attended two years ago. She said the Mass was in both English and Spanish, but didn’t notice the outreach as much as March 27.

“I feel that it was really nice and important for them to do that,” said Cerna, 15. “It makes (Latinos) feel like they’re part of everything.”

The archdiocese’s pilgrimage has become a template for other dioceses as well. Wilmington Bishop W. Francis Malooly, formerly of Baltimore, was influential having his diocese host its first pilgrimage March 27 as well. Just under 400 young people reportedly attended.

Throughout the day in Baltimore, Archbishop O’Brien stressed the call to be like Jesus, using the small crosses they carried as an educational tool.

“There’s no more universal symbol so well understood, so deeply appreciated, as the cross,” the archbishop said. “It represents the most important event in the history of the world. It’s a symbol of burdened man at the very heart of our faith.”

He told the pilgrims of the experience of Jesus as a human and his willingness to take on their pain. He then lifted a small crucifix and talked of Jesus’ relentless love.

“So fully did he give and love,” the archbishop said, “so completely and infinitely, that the father raised him up on Easter morning and promised that he would give those who followed him and took up the cross, the same new life and eternal life.”

He held both the crucifix and the cross in the air.

“Something is missing from the cross,” he said. “It’s the body of Christ, and the reason it is missing is because you are invited to climb on, to continue in your own lives the suffering that Christ began which continues in the church by all those who intentionally join their lives to his.”