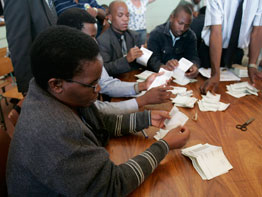 CAPE TOWN, South Africa – Zimbabwe’s Christian leaders have called for international intervention in the country’s crisis, saying that those accused of voting for the opposition in March 29 elections are being tortured, abducted and murdered.

“We warn the world that if nothing is done to help the people of Zimbabwe from their predicament, we shall soon be witnessing genocide similar to that experienced in Kenya, Rwanda, Burundi and other hot spots in Africa and elsewhere,” said the Zimbabwe Catholic Bishops’ Conference, the Zimbabwe Council of Churches and the Evangelical Fellowship of Zimbabwe in an April 22 statement from the capital, Harare.

Noting that they recently “issued statements commending Zimbabweans for the generally peaceful and politically mature manner in which they conducted themselves before, during and soon after the elections,” the leaders said recent reports from their churches throughout the country gave cause for alarm.

“Organized violence perpetrated against individuals, families and communities who are accused of campaigning or voting for the ‘wrong’ political party … has been unleashed throughout the country, particularly in the countryside and in some high-density urban areas,” they said.

“People are being abducted, tortured, humiliated by being asked to repeat slogans of the political party they are alleged not to support, ordered to attend mass meetings where they are told they voted for the ‘wrong’ candidate and should never repeat it in the runoff election for president, and, in some cases, people are murdered,” they said.

The church leaders urged the people of Zimbabwe “to refuse to be used for a political party or other people’s selfish end, especially where it concerns violence against other people, including those who hold different views from your own.”

Commending Zimbabweans for turning out to vote and “for exercising your democratic right peacefully,” the church leaders urged their members “to maintain and protect your dignity and your vote.”

The church leaders expressed their “deep concern over the deteriorating political, security, economic and human rights situation in Zimbabwe,” where official results of the presidential and parliamentary elections have yet to be released.

Movement for Democratic Change leader Morgan Tsvangirai says he won the presidential election and that his party took a majority of parliamentary seats.

President Robert Mugabe, 84, and his supporters are preparing for a runoff as well as challenging some of the parliamentary results.

The church leaders urged Zimbabwe’s electoral commission “to release the true results” of the elections, noting that “the unprecedented delay in the publication of these results has caused anxiety, frustration, depression, suspicion and in some cases illness among the people of Zimbabwe” at home and abroad.

“A pall of despondency hangs over the nation, which finds itself in a crisis of expectations and governance. The nation is in a crisis, in limbo, and no real business is taking place anywhere as the nation waits,” they said.

The church leaders appealed to the Southern African Development Community, the African Union and the United Nations “to work toward arresting the deteriorating political and security situation in Zimbabwe.”

The church leaders said that, “as the shepherds of the people,” they were appealing for an “immediate end to political intimidation and retribution arising from how people are perceived to have voted.”

Youth militia and military base camps “that have been set up in different parts of the country should be closed,” they said.

“The deterioration in the humanitarian situation is plummeting at a frightful pace,” the church leaders said, noting that the cost of living “has gone beyond the reach of the majority of our people.”

Zimbabwe has the world’s highest inflation rate – more than 100,000 percent – an unemployment rate of more than 80 percent and severe shortages of basic foods and fuel.

“There is widespread famine in most parts of the countryside on account of poor harvests and delays in the process of importing maize from neighboring countries. The shops are empty and basic foodstuffs are unavailable,” said the leaders.

“Victims of organized torture who are ferried to (the) hospital find little solace as the hospitals have no drugs or medicines to treat them,” they said.

Zimbabwe’s Jesuits said that if the concepts of national sovereignty and noninterference “prevent the people of Africa from coming to the aid of their oppressed, abused, starved brothers and sisters, then we must question the value of such concepts, inherited from 19th-century colonial powers, and redefine them according to our” present needs.

“The real people of Africa, men, women and children, their welfare, health, education, work and shelter must be the center and focus of all political endeavors and (hold) the attention of statesmen,” they said in their April 17 newsletter.