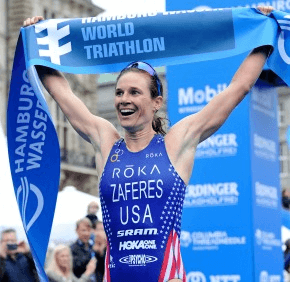 Katie Hursey Zaferes
By Paul McMullen
pmcmullen@CatholicReview.org
Twitter: @ReviewMcMullen
A world-class triathlete heading to the Rio Olympics, Katie Hursey Zaferes travels with a custom bicycle and enough workout gear to outfit an entire aerobics class.
How does she lighten her load?
With liberal doses of faith and family.
When Zaferes, 27, competes in the women’s triathlon Aug. 20, she’ll represent not just the United States, but a large extended family in Carroll County, one that includes an absent cousin.
Zaferes was baptized at St. John in Westminster, and raised at St. Bartholomew in Manchester, where her parents, Bill and Mary Lynn Hursey, have been parishioners since the 1990s.
“The Hurseys are a remarkable family, I baptized their youngest (Karly) the first month I arrived in Carroll County,” said Father Michael Roach, pastor of St. Bartholomew. “They’re a faithful family, always at Sunday Mass. You wish you had a hundred families like them.”

Zaferes recalls being an active participant in the youth ministry directed by Linda Sterner.

“The youth group picnics and trips were my favorite,” she wrote in an email. “It’s a community full of love and support, that’s the best part about St. Bart’s. I always look forward to going back home and seeing everyone at Mass.”
There have been few opportunities for that since 2007, when she graduated from North Carroll High School and headed to Syracuse University on a track and field scholarship.
Zaferes answered questions from Banyoles, Spain, where she was completing her Olympic preparation. She and her husband, Tommy, also a pro triathlete, make their home in Santa Cruz, Calif., but their careers keep them on the road nine months a year.

Like his wife, Katie, Tommy Zaferes is a professional triathlete. (Wagner Araujo/USA Triathlon)

“One of my favorite rituals,” she wrote, “is when my husband and I pray together before bed. One of us will start, then the other will fill in anything that the other one may have missed. Sometimes I learn things about my husband’s day, or even life, just by listening to him pray.”

Their intentions continue to include her third cousin, Jacob Offutt.

In December 2014, six months after he had graduated from St. John School in Westminster, Jacob (pictured at left) was diagnosed with a rare form of brain cancer. He was a second-degree black belt in karate, and a “Jake’s Kickin’ It” campaign included photos of Zaferes in that pose during the first half of 2015, a year in which she competed in England, New Zealand, Sweden, South Africa and the United Arab Emirates.

“We started taking pictures of ourselves and our friends ‘kickin’ it’ around the world,” Zaferes said. “We wanted to show Jake that there were many of us fighting with him.”

“Katie’s not only a great athlete, she’s a kind and considerate person,” said Joe Offutt, Jake’s father. “Jake looked up to her. Her accomplishments and travels were a good distraction for him.”

Offutt is a first cousin to Zaferes’ mother, who prays for her daughter’s safety in an endeavor which, at the Olympics, consists of a 1.5-kilometer (.93 mile) swim, 40-K (24.8 miles) bike ride and 10-K (6.2 miles) run.
Mary Lynn Hursey followed online the progress of a 2014 triathlon in Cape Town, where Zaferes lost her computer timing chip and her mother’s mind raced to the sharks offshore.

“I had that fear,” Mary Lynn Hursey said. “She lost her chip and her name wasn’t coming up, and I’m asking, ‘Where is my child?’ … I’m always praying for Katie, before, during and after a competition. I pray for her safety. The biking is a scary thing. When you see a DNF (did not finish) … your mind races.”
Triathlon’s open-water swimming will be conducted in the notoriously polluted waters of Rio de Janeiro, where “Team Katie” will include her parents.
She was an age-group swimmer and had a 1,600-meter best of 4 minutes, 57 seconds in high school track, but Zaferes didn’t respond to a recruiting pitch from USA Triathlon until near the end of her collegiate running days.
Faith played a part there, too.
While earning a bachelor’s degree in physical education at Syracuse, Zaferes babysat for Ashley and Rick Kelley, whose five children include four adopted from Ethiopia. Zaferes recounted a pivotal Sunday with them and Monsignor J. Robert Yeazel, pastor of Holy Cross Church in Genesee, N.Y.

“I remember one particular Mass, when I was deciding whether or not I was going to commit to triathlon,” she said. “The entire homily, I felt like the priest was speaking to me. He was saying that sometimes you need to get out of your comfort zone and try new things.”