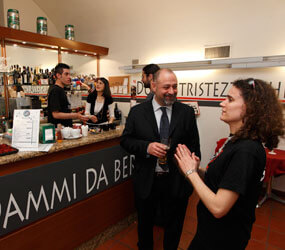 ROME – Young Catholics sip beer and kick back in the crypt beneath the Basilica of St. Charles, home to the GP2 bar and youth club in downtown Rome.

The pub, sponsored by the Rome diocesan office of youth ministry and Catholic Action’s youth section, is dedicated to the late Pope John Paul II – Giovanni Paolo II in Italian.

Aside from panini, coffee, beer and wine, the club dished out some special events to celebrate Pope John Paul’s life and beatification, scheduled for May 1.

A special Czech beer, blessed by Plzen Bishop Frantisek Radkovsky, was to arrive at the pub April 20. Blessing beer is rare today, but the bishop will use a prayer written centuries ago when monasteries produced beer and would pray for those who would consume it.

Massimo Camussi, the event manager at GP2, told Catholic News Service that the events are designed to help people know Pope John Paul better. Monsignor Slawomir Oder, the postulator of the late pope’s sainthood cause, shared stories about the late pope and described his position as a postulator during an encounter at the pub April 7.

GP2 hosted Lorena Bianchetti, an Italian journalist, who discussed Pope John Paul and the media April 1, and a week later the club inaugurated a photo exhibit on the late pope.

As the beatification drew nearer, it also scheduled an encounter with retired Cardinal Camillo Ruini, the papal vicar of Rome from 1991 to 2008 and former president of the Italian bishops’ conference, who was very close to Pope John Paul.

The GP2 pub’s mission statement said it is a place for Catholic youth to gather in a safe environment, enjoy a beer or coffee and share in the joys of being Christian. The pub is open Thursday through Sunday evenings and offers concerts, photography and art exhibits, films and speakers.

Camussi, the event manager, told CNS that the pub “is a dream come true,” and “a point where young Catholic or non-Catholic people can speak, play and drink a beer.”

The idea for the locale was born 11 years ago after Rome hosted World Youth Day for the Holy Year 2000. An information and meeting point for young people was set up in the basilica crypt, where the bar is now, said Camussi.

“John Paul II loved the friendship (of the youth) and had a special affection for them,” he said.

“He loved our mess!” Cristina, a volunteer at GP2, told CNS. Because evening gatherings and a nighttime vigil were highlights of World Youth Day, GP2 is a “night place,” she said.

Most of the GP2 staff are volunteers or are paid to work at the pub as part of their involvement in an Italian civil service project.

Visitors range in age from 18 to 30 years old, and the patrons include regulars and pilgrims and students of Catholic colleges in Rome. Camussi estimated that 20 percent of GP2’s clients are foreigners, mostly from Eastern and Central Europe, Asia and Africa.

GP2 has many visitors from around Italy who would like to create a similar establishment in their own diocese, he said, because they see GP2 as a good example of what a Catholic youth bar could be.

“This is a new thing now, because there is no pub in Rome like us,” said Camussi. “I hope it’s (just) the first place of this type.”