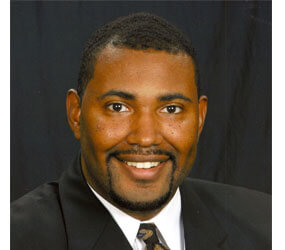 WASHINGTON – When Fredron DeKarlos Blackmon was elected to lead the Knights of Peter Claver last September, it was a natural progression of his involvement as a professional lay Catholic.

Just 34 years old, Blackmon has a “day job” as pastoral associate and director of liturgy and music for St. Joseph Parish in Huntsville, Ala. His election as supreme knight of the fraternal organization is just the latest piece of what he sees as a very fulfilling life in ministry.

The Knights of Peter Claver was founded by Josephite Father Conrad F. Rebesher in 1909 for African-American men who were barred from other organizations in the Catholic Church.

Blackmon was in Washington in March to participate in the Easter Prayer Breakfast hosted by President Barack Obama at the White House. In an interview with Catholic News Service during that visit, Blackmon talked about how he got where he is and what he hopes to accomplish in the organization.

A: In running for the office of the supreme knight I had the support of my bishop. Bishop Robert Baker (of Birmingham, Ala.) believes in me. I think that goes a long way. But I also have a gracious pastor. I am the pastoral associate at St. Joseph Church in Huntsville and my pastor is quite a supporter as well… As a pastoral minister the goal for me is to press for the mark, toward the prize of a high calling. … Everything I do is about pressing toward the mark. At the end of my life I want to look at the Lord and have him say to me, “I know you, come in.”

Q. So many people want to be in that position, but in their 30s and in their 40s, making money has to come first. They’re getting the savings accounts going so the kids can go to college, buying the house. These sort of things take precedence. That seems to be the reason people don’t get involved.

A: Everything we have in life we have as a gift. Money will not make you happy. If I chased money I don’t know that I would live a fulfilled life as I do. I make decisions now that people are not happy with at times. But at the end of the day, I believe that God’s grace sustains me where his will puts me.

Q: Do you see yourself continuing in parish ministry?

A: Anyone who is in parish life knows it can be trying at times. I try to keep before me that I will go where the spirit leads, go where I’m sent. I taught in high school for four years. When I came to St. Joseph Church, even before I started teaching in that high school, I told the youth minister “you will never find me working in youth ministry.” The best days of my life, as my wife will tell you, were spent in that high school. Before that it was more me in the equation than it was the Lord. When you let go and let God, allow God to use you as the vessel, you come to find that many of the things that you did not want to do will be the things that you need to do that will be of benefit to others.

Q: What did you want to be when you were a kid?

A: A priest actually.

Q: How far did you carry that?

A: I think that started when I was in the fifth grade. I spent a year at St. Joseph’s Seminary college and while I was there I met this young lady (gesturing to his wife, Kanobia A. Russell-Blackmon). … I found my vocation in this young lady.

Q: What do want to see the Knights accomplish?

A: There has to be a focus on working in development and evangelization to keep our Catholic schools open, particularly in economically deprived areas, in the inner city, in black communities. I’m a firm believer that Catholic education is apostolic work on the part of the church. We have an obligation, all of us as Catholics, but those needs are particularly poignant for black Catholics.

In some of our schools, it would be particularly helpful if we had religious who look like the children that we have. But that’s not a luxury we enjoy. But we need to preach that each and every one of us, we all have an obligation (to encourage vocations).

The third point that is important to me is life issues. There needs to be a good pro-life movement within the African-American Catholic community.

Q: Are pro-life issues different in the white or Latino Catholic Church than in the African-American church?

A: I don’t know that they’re different. We have to do a better job of meeting people where they are. A priest could preach a homily in one place but due to cultural issues or whatever, preaching the same homily the same way may not get through to people. So we have to consider the context. … I could bring in whole staff of people to talk about pro-life issues, but it will fall on deaf ears if the people doing the talking have no ties to the community.