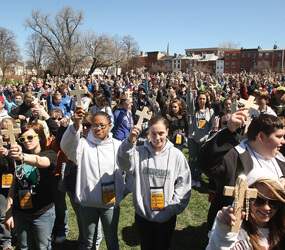 The bright afternoon sun of April 4 reflected off more than 1,200 youthful faces, and a strong wind filled the spaces between them on the lawn of the St. Mary’s Spiritual Center and Historic Site.

The gusts pulled the youths and young adults together as they held wooden crosses and rosaries in the air.

Archbishop Edwin F. O’Brien, alongside auxiliary Bishop Denis J. Madden, extended his hands to the crowd and stated their crosses were the “ultimate sign of our belonging to Christ” as they began the 16th Archdiocese of Baltimore Youth and Young Adult Pilgrimage.

“Lord we pray that your servants use these crosses and rosaries as symbols of faith and pilgrimage,” the archbishop said in a rally before the pilgrimage.

Then, the archbishop walked down to the crowd where a larger wooden cross was to be carried in the annual pilgrimage sponsored by the archdiocese’s Division of Youth and Young Adult Ministry.

The archbishop joined them as they hoisted it above their heads and began a journey through the streets of Baltimore toward the Basilica of the National Shrine of the Assumption of the Blessed Virgin Mary for eucharistic adoration.

Half of the youths followed, while the other half moved down Paca Street to the Shrine of St. Jude for a concert by artist ValLimar Johnson

People walking and driving through the streets stopped and watched the cross-bearing group, asking, “What are you doing?”

The youths responded with the theme of the day, “Unstoppable faith, hope and love!”

The walk called to mind the journey of Jesus in his last hours, as he carried the heavy burden of the world’s salvation on his shoulders.

Members of the youthful crowd replaced those who carried the cross every few blocks throughout the day.

“I think they’re very willing to live their faith,” Bishop Madden said. “It’s a big challenge for all of us to live our faith together. This is something that gives us great, great hope.”

St. Margaret, Bel Air, parishioner Andrea Boyer, who was walking with a group from St. Francis de Sales, Abingdon, was one of the first to hold the cross with Archbishop O’Brien.

“It’s empowering for Catholic youth,” Andrea said. “Having us all walk together is a statement that says we’re here and we care about this.”

Seminarian Joseph Gill walked with other future priests and the crowd to answer questions about vocations.

“I think it gives people hope when they see seminarians because they realize the church is young and that the leadership of the church understands what they’re going through as young people,” Mr. Gill said.

The day helped usher in Holy Week in the Archdiocese of Baltimore. Prior to the solemn eucharistic adoration led by Archbishop O’Brien, 20-year-old Juana Landaverde of St. Mary, Annapolis, told her story of working two jobs to make ends meet.

Even though she was nervous about sharing her life, she found comfort in the multi-cultured, young faces of the Catholic Church.

“There are no boundaries,” she said. “You get to share your faith with people who are doing the same thing.”

At St. Jude, Mrs. Jansen delivered a fiery mix of song and motivation, imploring the young people to “walk for justice” and recognize “God is good all the time.”

The youths roared in approval by cheering, singing, clapping and dancing.

Mark Pacione, director of the Division of Youth and Young Adult Ministry, said there is an awakening among people during the pilgrimage.

“It’s a lot of joy,” he said. “You say, ‘faith’s bigger than just being at my church and that’s kind of cool.”

St. Francis Xavier, Baltimore, parishioner Kenny Orsot wore a broad smile as he stood with his friends at St. Jude.

“This is very fun to be with everyone in this church just singing and sharing faith,” Kenny said.

The two groups, once split in the morning because of their sheer size, reunited at the city’s War Memorial Plaza to pray the rosary for peace. They then walked three miles, led by the cross, to St. Casimir, Canton, for a Palm Sunday Mass. In a park outside the church, Archbishop O’Brien blessed their palms.

“Christ entered in triumph into his holy city to complete his work as our Messiah, to suffer, to die and to rise again” he said. “Let us remember with devotion this entry which began his saving work and follow him in a lively faith. United with him in his suffering on the cross, may we share his resurrection and new life.”
Watch a video report.