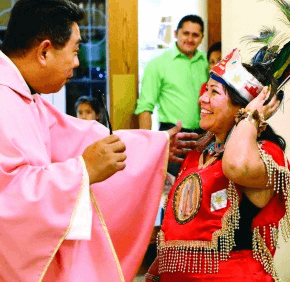 Twitter @ReviewErik
The June announcement that 12 parishes are getting new pastors and another five receiving administrators means saying goodbye to old pastors.
Some parishioners are less than thrilled about that, and Monsignor James W. Hannon, director of the division of clergy personnel of the Archdiocese of Baltimore and one of the key parties involved in assigning and re-assigning pastors to parishes, calls such a reaction “completely understandable.”
“When a pastor has served a parish well, and then moves on to another parish, it is normal for parishioners to grieve his leaving,” Monsignor Hannon wrote in an email. “So often the pastor has had an important role in the life of these parishioners – sometimes for many years.”
Monsignor Adam J. Parker, vicar general of the archdiocese, said such grieving is actually “a good sign,” because it shows that “the people love their priest.”
Nevertheless, Monsignor Hannon said, “the assignment and reassignment of priests is simply part of the life of the church – this is and has long been a normal way in which priests have served in parishes.”
It is important to note, he added, that archdiocesan priests are ordained for the whole archdiocese as opposed to a particular parish.
“I think we have to invite parishioners of our parishes to understand that the needs of the Archdiocese of Baltimore go beyond their parish boundaries, and that the priest who has served them so well for the past years may be a blessing to another parish community in their need.”
Under canon law, pastors serve six-year terms, including at archdiocesan parishes under the care of religious orders.
Monsignor Hannon said that pastors being appointed today are generally expected to complete one term and possibly another at a given parish. Pastors serving longer than 12 years, he added, may be “grandfathered” into an older system of assignments or be close to retirement age.
Common reasons for transferring clergy, Monsignor Hannon said, include filling the position of a retiring pastor; giving a pastor who has served at smaller parishes the opportunity to broaden his experience at a larger one; and placing a pastor within the geographical area of his other ministry and service.
“Sometimes,” the monsignor added, “a priest feels he has done all he can do in a parish, and he discerns that it is time for him to move on to another parish where he can offer his unique gifts.”
Priests have different talents, emphasized Monsignor Parker.
“There does tend to be a notion that a priest is a priest, and we’re using the Henry Ford concept of interchangeable parts,” he said. “That’s not at all the case.”
Furthermore, not all talents are innate, and the archdiocese can and does nurture those that are not. In 2015, Father Mark Bialek, along with two seminarians, spent seven weeks in Mexico City learning Spanish, a skill that helped him work to bring the English-speaking and Spanish-speaking communities together at Resurrection of Our Lord in Laurel.
He said that he will have the same goal starting July 1, when he takes the helm at St. John in Westminster, a parish with sizeable and active communities of both languages.
“I believe that will be my mission,” he said, “making sure the parish is welcoming for all people, no matter what culture they come from.”
The process
Archbishop William E. Lori gives final approval for all clergy assignments.
At the start of the process, Monsignor Hannon said, he works with the Placement Committee of the Priestly Life and Ministry Board, which interviews priests coming up on the completion of a specific term that was outlined in a letter of appointment.
“This committee also DISCERNS who might be a good fit for a specific parish,” he added, using the block capitals in his email.
“We try to suggest a match between a parish and a priest based on a number of factors,” he said. “What does the parish need? Is there a school attached to the parish? Are there any specific communities that the parish has that will require a specific skill set? What are the specific talents of a priest? Is it a good time for him to move?”
The suggestion is then discussed with the larger Priestly Life and Ministry Board – both the board and committee are comprised of experienced priests of a range of ages, “and they have a broad knowledge of the priests of the Archdiocese of Baltimore, most especially diocesan priests,” Monsignor Hannon said, adding that recommendations are discussed thoroughly by the archbishop, Auxiliary Bishop Denis J. Madden and their advisors.
Priestly perspective
Parishioners aren’t the only ones challenged when a pastor is re-assigned.
“You do get attached,” Father Bialek said. “Every parish I’ve been at has been wonderful, with people filled with faith and joy.”
However, he said, “you want to serve the archdiocese, and you know you serve at the pleasure of the archbishop.”
“We go with joy to serve wherever we are called to serve.”
Monsignor Hannon is hoping for a little reciprocity.
“Parish communities have a real opportunity to offer the blessing of their welcome to those who have accepted the invitation to serve them now and into the future,” he said.
See also:
Family infuses Knights with new blood
Father Rubeling’s priestly ordination is a family affair
PrevNext