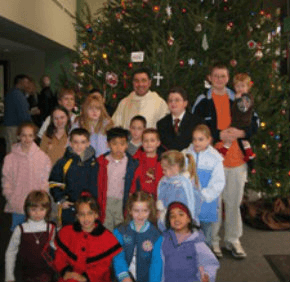 By Jessica Marsala
jmarsala@CatholicReview.org
It was in May 2012 when 24-year-old Rachel Smist proposed an idea to her fellow parishioners at the Basilica of the National Shrine of the Assumption of the Blessed Virgin Mary in Baltimore.
While not novel, her proposal – a young professionals group for those looking to engage like-minded and similarly aged individuals in faith, fellowship and service – was, in her mind, overdue.
Smist has since left the group and the Archdiocese of Baltimore for Silver Spring, but others, such as Kathleen Gilpin, 31, have helped keep it functioning.
“Once you get out of college, you kind of fall off the chart in terms of Catholic organizations,” said Gilpin, the basilica group’s outreach coordinator and one of its original members.
In its two years of operation, the Baltimore Basilica Young Professionals Group has hosted Bible studies led by the seminarians of St. Mary’s Seminary and University in Roland Park and devoted six Saturdays to making sandwiches for Our Daily Bread, among other activities.
Most recently the group, along with Baltimore-based Catholic Relief Services, hosted a Dec. 15 prayer vigil for the Philippines, which had been ravaged Nov. 8 by Typhoon Haiyan, at the Pope John Paul II Prayer Garden next to the basilica.
The Red Shoe Crew is another of Baltimore’s young professionals groups.
Lauren Kohr, the development and community relations manger at Ronald McDonald House Charities of Baltimore, said the group, which launched in 2011, is “kind of their (young professionals) way into the House.”
Red Shoe Crew members, who pay $45 in annual dues, help cook, clean and decorate for the residents of the Ronald McDonald House, which provides “a home away from home” for critically ill children undergoing treatment at nearby hospitals and their families.
“If we’re not going to give back to the community, then who is?” asked Melissa Delaney, one of the Crew’s first members.
Its main activity is the Red Shoe Shuffle, a 5K footrace held every April, which benefits ongoing operations at the Ronald McDonald House.
Starting and maintaining a young professionals group requires ambition, creativity and persistence. Merely having the desire and/or need for a group is not enough.
Having volunteered with Boys Hope Girls Hope of Baltimore, in 2011 Matthew J. Youssef came up with the idea for a young professionals group serving the organization.
“What I wanted was a one-stop shop for volunteers,” said Youssef, an attorney.
He works fundraisers, which can take the form of a happy hour, recruiting individuals, willing to take their commitment to the next level, who can supplement the non-profit institution’s staff and better relate to the underprivileged youth in its residential academic scholarship program.
He credits Jennifer Meyerhoff, the director of development at Boys Hope Girls Hope of Baltimore, with aiding recruitment.
Gilpin, of the Basilica Young Professionals Group, posts on social media, puts ads in bulletins and emails colleges, but also brainstorms about using more traditional marketing, such as hanging a banner near the Basilica, because there’s “only so much that word of mouth can do.”
“It’s those people who aren’t looking for the Catholic faith that we need to get in touch with,” Gilpin said. “We just want to offer the opportunity for them to hear about the Catholic faith.”
Gilpin envisions groups such as hers becoming “permanent fixture(s) of the Catholic faith.”
She asserts that young professional groups, particularly ones connected to faith, support individuals in the “critical stage” of their lives when “there’s a lot of turmoil” and when people are starting careers and families.
“It’s also an opportunity to share your skills,” Red Shoe Crew member Delaney said, of nonprofits that benefit from the resources of young professionals.
Also see:
School news: Soccer standouts, good manners and robotics
Priest says hitching a ride on the popemobile was invite to hit the road for God
PrevNext