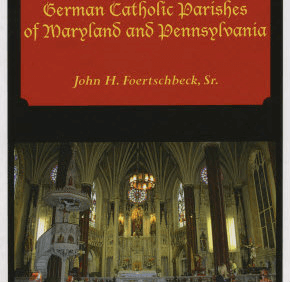 By George P. Matysek Jr.
gmatysek@CatholicReview.org
In a newly self-published book, an amateur historian from St. Michael in Poplar Springs offers an exhaustive look at how the German community contributed to Catholic life in the Archdiocese of Baltimore and beyond from the 18th century through the 21st century.
In “German Catholic Parishes of Maryland and Pennsylvania,” John H. Foertschbeck Sr., an author of several local history books and a former parish council president at St. Michael, covers the development of more than 40 area parishes and missions originally founded to serve German immigrants.
The Redemptorists receive special attention in the 236-page work. The religious order of priests and brothers arrived in Baltimore in 1840 at the invitation of Archbishop Samuel Eccleston. They were responsible for the spiritual care of all German Catholics in Maryland.
The School Sisters of Notre Dame, headquartered in Bavaria, also are highlighted for their critical work educating the children of German immigrants of the area.
Foertschbeck focuses much attention on four Baltimore German parishes: St. Alphonsus, and Sacred Heart of Jesus; and the now-closed St. James and St. Michael. He includes charts that tally the number of religious vocations that sprang from those four parishes – listing the names of priests, brothers and sisters, along with their religious communities.

According to the author’s research, from 1850 to the 1900s, there were 747 religious vocations among the four noted parishes. Several German families had multiple religious vocations, including the Dietz, Mueller and Schmitt families.
Foertschbeck, a former national director of the Association of Information Technology Professionals, illustrates his book with numerous rare archival photographs. Areas outside Baltimore, including Annapolis, Cumberland and Manchester, are also highlighted.
To order, call 410-795-1490 or visit germanjohnsworld.com. $34.95, soft cover; $44.95, hard cover.
Also see:
Young professionals groups tap into neglected demographics
Pope: Too many Christians have watered-down hope, lukewarm faith
PrevNext