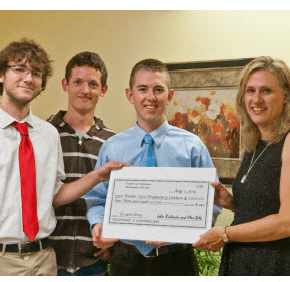 By Catholic Review Staff
St. John, Westminster, parishioners Alex Belk and John Richards were pretty jazzed about the results of a dance fundraiser they held to collect funds for Tender Care Pregnancy Centers.
Richards organized and planned “A Midsummer Night’s Dance,” while Belk doubled as a DJ and dance instructor for the event, which was attended by approximately 135 teens.
The young men raised $1,000 and presented a check to the center’s director, Susan Hoffman.
“Teens are the best age group to raise awareness in, because a lot of them aren’t hearing about this,” said Belk. “Having a dance for the pregnancy center makes them think, ‘What is a pregnancy center? Why is this important?’”
Attendees came from throughout Maryland, as well as southern Pennsylvania and northern Virginia.
Caroline Clark, who attends Mass at St. Mary’s in Hagerstown, traveled to Westminster to make the event.
“It’s important to me, because I was adopted,” Clark said. “My mother was very young when she had me, so I understand the great need for crisis pregnancy centers for young women in that situation.”
Clark viewed the social event as an effective fundraiser.
“It’s really necessary to raise awareness. I think because it’s something fun, and it does raise awareness, maybe those attending will want to do something more.”
PrevNext