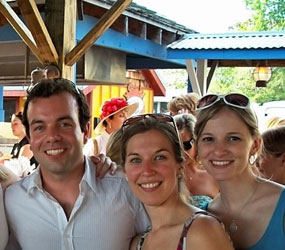 The Kentucky Derby is quickly becoming a Baltimore event.

The G.B. Charities Young Members Group hosted a Derby Day fundraiser in 2010 that attracted more than 200 people. More than twice that number is expected to come to Nick’s Fish House May 7 to partake in the fun again, which includes food, drink, prizes, games and, of course, the race itself.

The group hopes to raise $15,000 for its mission to provide Baltimore area young people educational opportunities.

Mulford became involved with G.B. Charities two years ago. He was having breakfast with his former boss, Robert Cawley, who asked about Mulford’s personal life. Mulford knew Cawley was president of G.B. Charities Inc., an organization formed by local friends. Known as the “Gutter Boys,” those friends sought to improve the Baltimore area by providing access to better educational opportunities. Their charitable events have become Baltimore mainstays.

Mulford shared with Cawley a vision he and his 20-something friends had formulated. The friends had all gone to Catholic elementary schools and Calvert Hall College High School and were looking to give back in concrete ways.

“I said it was very similar to G.B. Charities,” remembered Mulford, a graduate of Towson’s Immaculate Conception School. “We really wanted to find a way to stick close to each another, keep our friendships strong and to give back to a community that, for all intents and purposes, had gotten us to where we were. We really wanted to give back to that Catholic education.”

Mulford, a health care consultant, had attended the G.B. Charities’ popular bull roast and golf tournament events in the past. Cawley told Mulford that G.B. Charities was looking to attract younger members to continue the mission. It was a natural fit. Mulford was voted onto the organization’s board and the Young Members were formed to serve as a “sub-entity,” according to Mulford.

The young members meet quarterly and have a student selection committee that reviews applications from needy local students who are looking to continue or enroll in a faith-based school.

“We take the money raised at these fundraising events and divvy it out to those individuals by way of scholarship money through the school’s they’re applying to go to,” Mulford said. “One hundred percent of the money raised goes directly to the mission.”

Entry to this year’s Derby Day will cost $60, and attendees are encouraged to wear “Kentucky Derby casual.” The event is becoming so successful that Mulford said the Young Members might start a family-friendly softball or kickball day-long tournament

“The schools,” he said, “were an educational extension of my family.”