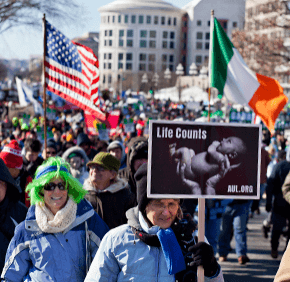 By Elizabeth Lowe
elowe@CatholicReview.org
WASHINGTON – The bitter cold, wind and snow did not deter Andrew Guernsey – and hundreds of thousands of other pro-life advocates – from attending the annual National March for Life Jan. 22.
“We’re here for the cause,” said Guernsey, 19, a Catholic veteran of the march, sophomore at The Johns Hopkins University in Baltimore and president of Voice for Life, Hopkins’ pro-life student club which was granted official club status last year. “It’s really important that we take a stand for life and show that we’re the pro-life generation. Young people are increasingly coming to the realization that life is sacred from the moment it starts.”
This year’s rally marked 41 years since Roe v. Wade, the 1973 U.S. Supreme Court decision that legalized abortion in all 50 states.
Monica Rex, a sophomore at Johns Hopkins and director of media relations for Voice for Life, attended the march for the first time.
“It’s a matter of trying to take a step back and say this is not OK,” said Rex, 20, a nondenominational Christian. “What I would like to see accomplished is the abolition of abortion.”
To view a slideshow, navigate the arrows below.
Interested in purchasing a photo? Click here to view our Smugmug gallery.
About a dozen members of Voice for Life were among the marchers who carried signs from the snow covered National Mall, where the event began, to the U.S. Supreme Court Building.
The several inches of snow that fell throughout the region Jan. 21 kept some Archdiocese of Baltimore Catholic school groups from attending the march.
Despite the weather conditions, a group of about 70 from Mount de Sales Academy in Catonsville traveled to Washington, D.C. and joined 96 girls from St. Cecilia Academy in Nashville, Tenn., its sister school, in the civil rights demonstration.
Taylor Roach, a freshman at St. Cecilia, attended the march for the first time.
“It’s amazing,” said Roach, 14. “It shows a real sense of community.”
Prior to the march, thousands of youths attended the Youth Rally and Mass for Life at the Verizon Center. Baltimore Archbishop William E. Lori was one of nine bishops who concelebrated the Mass, along with dozens of priests who represented 93 dioceses.
“How do we know God loves us? Because he became one of us,” said Father Michael S. Paris, parochial vicar of St. Patrick in Rockville, who delivered the homily. “He loves each baby in the womb. Each unborn child has the face of Jesus Christ. I believe God wants to use us to end abortion.”
John Hutchison, a junior at Mount St. Joseph High School in Irvington and parishioner of St. Peter the Apostle in Libertytown, attended the march to draw attention to the severity of abortion.
“When I think of what Christ did (dying on the cross), it’s easy for me (to attend),” said Hutchison, 16. “I want to defend the lives of the innocent.”
Lisa Sagerholm-Hunter, coordinator of the respect life group at St. John the Evangelist in Severna Park, said the number of people at the march, despite the frigid temperature, highlights the commitment to the cause.
“This is a great witness, that people still come out to make a statement,” Sagerholm-Hunter said. “We have to be a presence.”
In Maryland, a statewide March for Life is scheduled for March 10 in Annapolis.
Also see:
Pro-lifers storm Internet during March for Life