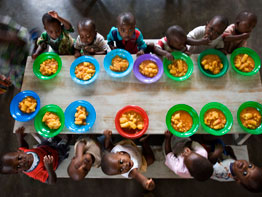 WASHINGTON – Catholic Church officials continued to advocate for and work to help victims of violence and the global food and economic crises in 2008.

In addition to helping refugees from conflicts with global repercussions in the Middle East or Africa, the church has advocated for justice and peace for the poor, hungry and defenseless in Asia and Latin America.

In some of the world’s hot spots, such as India, the violence was sectarian in nature. Nearly 60 people died, hundreds were injured and thousands were displaced in anti-Christian violence in India’s Orissa state. In late August, a Hindu leader and four of his associates were killed and, although a Maoist group took credit for the murders, Hindu fanatics blamed Christians.

Iraq continued to see Christians fleeing the country five years after the U.S. invasion. In northern Iraq, Catholic leaders said Christians were targeted for kidnappings and murder, and Chaldean Archbishop Paul Faraj Rahho of Mosul was among the victims.

Church aid workers provided basic necessities, counseling and legal assistance to many of the 2.3 million Iraqi refugees in Lebanon, Egypt and Syria. For Catholic agencies in host countries, that meant greatly expanding services.

In Lebanon, most of the Iraqis – including nearly 10,000 Chaldean Catholics – were unable to receive work permits or access to health services and schools, and some ended up in prison. In February and March, the Caritas Lebanon Migrant Center successfully negotiated with Lebanese authorities for the release of hundreds of Iraqi refugees detained because of their illegal status.

At the Vatican, Pope Benedict XVI denounced violence in world trouble spots. He also spoke against the continuing shortages of food and various economic crises. Just before leaders of the world’s most industrialized nations met in July, the pope said that “speculation and financial turbulence and their perverse effects on food and energy prices” have increased the vulnerability of the world’s poor and disadvantaged.

One of the most dramatic examples was found in Zimbabwe.

Although opposition candidate Morgan Tsvangirai won March elections, the government said he did not have enough votes for an outright win. In the months that followed, human rights groups said opposition supporters were the targets of brutal state-sponsored violence that left more than 80 dead and 200,000 displaced.

Although Tsvangirai and Zimbabwean President Robert Mugabe signed a power-sharing agreement in September, a month later the head of the country’s Catholic justice and peace commission said political leaders were playing politics at the expense of the poor, who were trying to survive on fruit. Aid agencies said more than 5 million Zimbabweans faced starvation, and the continued disruption in government services, including water and electricity, led to an outbreak of cholera. Zimbabweans, unable to get treatment, fled to South Africa, Mozambique, Zambia and Botswana, spreading the disease. By mid-December, 800 people had died of cholera in Zimbabwe alone.

Meanwhile, church officials in Congo – where more than 250,000 people were displaced by fighting between August and December– appealed to Canada, the United States, France and Belgium for help implementing a foundering cease-fire agreement signed in January.

Church leaders elsewhere in the world called for peace in their regions.

In his final Easter message before retirement, former Latin Patriarch Michel Sabbah of Jerusalem said the Holy Land needs leaders who are ready to “offer their lives” for peace rather than those who “issue orders to kill.”

In the predominantly Catholic Philippines, the country’s bishops worked throughout the year to end the conflict between the government and the Moro Islamic Liberation Front, which has been fighting for self-rule in Mindanao since the 1970s. Despite the efforts of individual bishops, the government ended peace talks with the rebels in September.

Amid the continuing violence in Sri Lanka, church leaders continued to appeal for the displaced, many of whom were Catholic. When the government ordered all aid workers to withdraw from Vanni as government forces attacked the region to wipe out the Tamil rebels, several priests, nuns and aid workers from Jesuit Refugee Service defied government orders and stayed with the displaced.

Church staff in Afghanistan, too, stayed despite threats on their lives. In August, four development agency workers were killed south of Kabul, bringing the Western aid agency deaths in Afghanistan to a record high. But aid workers, including those from the U.S. bishops’ Catholic Relief Services, pledged to stay because they said their work was bringing about successes for Afghans.

In addition to appealing for refugees and victims of violence the church provided a voice for millions of people struggling because of the world food crisis.

In Guatemala, for example, the price of tortillas, a basic food staple, rose 30 percent in the course of only a few months. Poor Mexicans, who eat nearly a pound of tortillas a day per person, have seen the price double in the past two years.