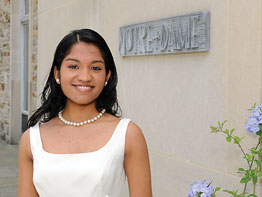 Neethu Abraham doesn’t suffer from a lack of ambition.

The bilingual Notre Dame Preparatory School senior is headed to Case Western Reserve in the fall to study pre-med after a remarkable high school career. Already she’s gained real-world experience in the medical field at The Johns Hopkins University, initiated an outreach to aid Ugandan children, managed her school’s dramatic and musical productions, and played an active role in NDP’s campus ministry – all while maintaining a 4.0 grade point average. And if all that weren’t enough, she’s an accomplished unicyclist.

However, chalking up this array of accomplishments to ambition alone would be a mistake. On paper, her resume portrays a dynamic go-getter, but it doesn’t tell her story. The sincerity and passion to serve that the bubbly, yet poised, teenager exudes in person far outshines her dazzling resume.

In the sun-filled lounge at the Towson school for girls, she perches on the edge of her chair as she tells of her many extra-curricular activities. Comfortable in the setting that nurtured her for four years, Neethu speaks with the relaxed and excited air of a departing high school senior who is anxious to move on in the world.

With each of her impressive pursuits, her reason for participation circles back to the people involved. Whether it’s classmates in the school play or patients at Johns Hopkins, Neethu’s enjoyment of a situation comes from the individuals she encounters.

At Hopkins, she worked with Dr. Michael Levy for six weeks last summer as he researched neuromyelitis optica (NMO), a central nervous system syndrome that affects the optic nerves and spinal cord. She lined up the stint at Hopkins herself by calling around to see who might be willing to take on a motivated high-schooler as an assistant.

The research post at Hopkins gave her an opportunity to try out two sides of the medical field: laboratory research and clinical work with patients. And while she did enjoy the research aspect, working with patients is what inspired her.

“It was an incredible experience. This was the first time I got real experience. I got to see what it is to be a doctor,” she says.

Though both her parents work in medical research, she decided to become a physician because she enjoyed directly touching the lives of patients. However, she’s not waiting until she finishes medical school to start changing the world for the better.

During the 2007-2008 school year, she and some friends were so inspired by the movie “Invisible Children,” which recounts the horrific plight of Ugandan children, they initiated an outreach campaign to help. The children in the war-torn country face the constant threat of violence and kidnapping, and an aid organization associated with the movie’s makers sells bracelets to help build walled schools to safeguard the children. Neethu’s group sold the bracelets, but then took it a step further.

It wasn’t quite enough to just raise money; they wanted to raise awareness among their peers as well. So the group organized a school-wide sleepover in which they screened the film and sold T-shirts and bracelets. They contributed $7,800 to the Invisible Children foundation.

Born in southern India (her native tongue is Malayalam, a dialect of that region), Neethu lived in Japan and Cleveland before settling in Baltimore as an eighth-grader. In Japan, she mastered the art of balancing a unicycle. But it was here in Baltimore that she blossomed.

As a freshman she had originally planned to audition for the school play, but at the last minute was too intimidated. She signed on as stage manager instead and never looked back. Stage manager, it seems, was a role better suited to her talent for connecting and organizing people.

Though the Baltimore County teen doesn’t get much of a chance to ride the unicycle these days (they are much harder to come by here), in her free time Neethu reads fiction and, like all teenagers, hangs out with her friends.

Friends, in fact, are an important force of Neethu’s life.

“I used to be a really shy person before I came to NDP. I think it’s the group of girls I’ve been with here,” she explains. “You grow into what you want to be, and they’ll support you. So you develop a confidence to go after what you want.”