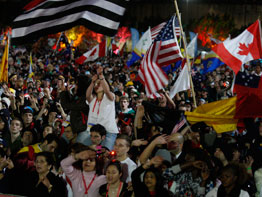 Before the Mass, as the pilgrims gathered on the old docklands at Barangaroo, they heard testimonies of faith experiences at previous World Youth Days, watched dancing by a variety of Aboriginal Australian and South Pacific islander groups and cheered a procession of 160 national flags.

While the official welcoming dances were taking place onstage, a group of six young men from Papua New Guinea offered their own choreographed blessing to the four directions of the compass from the place they found to stand in front of the estimated 4,000 concelebrating priests.

Australian Prime Minister Kevin Rudd welcomed the pilgrims in a dozen languages, ending by saying that he would speak in Australian, “G’day and have a great time Down Under.”

The Mass combined ancient chants, standard hymns, native singing and the anthem written specifically for World Youth Day, “Receive the Power.” Women from Australia’s Tiwi Islands sang as the Book of the Gospels was presented.

In his homily, Cardinal Pell encouraged the young people to use the July 15-20 celebration as a time not simply to celebrate their faith with peers from around the world, but to strengthen their commitment to Christ and to open further their hearts and minds to God’s will for their lives.

He also spoke to those who may not be practicing Catholics or have any connection to any religion: “Christ is calling you home to love, healing and community.”

“Secular wisdom claims that leopards do not change their spots, but we Christians believe in the power of the Spirit to convert and change persons away from evil to good, from fear and uncertainty to faith and hope,” he said.

Even those who believe and who practice their faith need to do more, Cardinal Pell said.

“Our task is to be open to the power of the Spirit, to allow the God of surprises to act through us,” he said.

Too many times, Christians profess and practice their faith, but they try to do it very comfortably and without taking risks, he said.

“Following Christ is not cost-free, not always easy, because it requires struggling against what St. Paul calls ‘the flesh,’ our fat relentless egos, old-fashioned selfishness. It is always a battle, even for old people like me,” the 67-year-old cardinal said.

“Don’t spend your life sitting on the fence,” Cardinal Pell told them, “because only commitments bring fulfillment.”

The cardinal also prayed that everyone who had come to Australia for World Youth Day would be blessed and glad they came “despite the cost, hassles and distances traveled.”