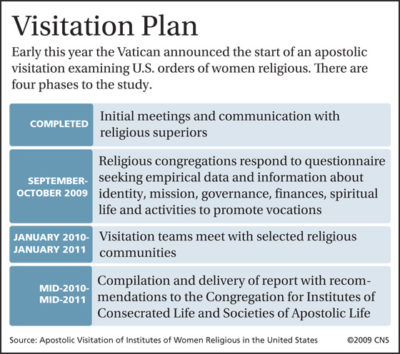 WASHINGTON – Orders of women religious in the United States will be asked to complete a comprehensive questionnaire that looks at six areas of religious life in preparation for a series of apostolic visits set to begin in January.

Topics to be considered are outlined in a working document distributed July 28 to the 341 leaders of the religious congregations to share with their members. The topics are related to the life and operation of the orders: identity; governance; vocation promotion, admission and formation policies; spiritual life and common life; mission and ministry; and finances.

Distribution of the questionnaire Sept. 1 will open the second phase of a comprehensive study of U.S. institutes of women religious announced in January and ordered by the Vatican’s Congregation for Institutes of Consecrated Life and Societies of Apostolic Life under its prefect, Cardinal Franc Rode.

Known in Latin as an “instrumentum laboris,” the July 28 working document will help the orders prepare to answer the Sept. 1 questionnaire, said Mother Mary Clare Millea, superior general of the Apostles of the Sacred Heart of Jesus and the apostolic visitator charged by the Vatican with directing the study.

“The reason we’re doing this is we want to help assess and promote the vitality of all the sisters,” she told Catholic News Service July 31.

Mother Clare, a Connecticut native whose religious institute is based in Rome, said the superiors will have until Nov. 1 to complete the questionnaire and return it to the apostolic visitation office in Hamden, Conn.

“Once we get all the questionnaires, we will analyze and select which congregations to visit,” Mother Clare said.

“For some congregations, their participation will end with the questionnaire,” she said. “We want to get a cross section (for the visits).”

The working document was developed and reviewed by clergy, including bishops, and women religious, Mother Clare said. She declined to identify who was involved in the process.

“We feel it’s prudent to let them remain anonymous,” she said.

Mother Clare also declined to discuss specifics related to the study’s cost, including how it is being financed. She said, however, the U.S. Conference of Catholic Bishops is not funding the effort.

“Anyone who has contributed has not wanted their name to be publicized,” she said.

“The congregation is conducting the visitation so they’re ultimately responsible for financing it,” she explained. “We have a project that is going to last three years. We are welcoming the support of individual dioceses, individuals or groups who would be willing to help defray the expenses.”

The first phase of the study, completed July 31, involved a series of voluntary meetings, telephone conversations or written exchanges between Mother Clare and superiors general. The apostolic visits encompass the third phase and the compilation and delivery of a final report, expected in mid-2011, will mark the fourth and final phase of the study.

The working document offers a series of questions in six areas for each religious community to consider as it prepares to answer the questionnaire:

– Governance: covering the effectiveness of an order’s style of governance; its practice in the daily life of its members; and the process for dealing with sisters who disagree publicly or privately with congregational decisions, especially in matters regarding church authority.

– Vocation promotion, admission and formation policies: covering policies for admission to the order, how the formation program offers members the foundations of the Catholic faith and doctrine through the study of Second Vatican Council documents, the Catechism of the Catholic Church and post-conciliar documents.

Mother Clare said she met, talked with or heard in writing from 244, or 72 percent, of the country’s superiors general during the six months after the study was announced. “That’s pretty impressive for a voluntary phase,” she said.

“The conversations I had with the major superiors have been very helpful in shaping the ‘instrumentum laboris’ and the topic questions we’ve presented, to understand the reality before we set out to ask them specific information,” Mother Clare told CNS.

Although the questionnaire will be completed by congregational leaders, Mother Clare also is encouraging individual sisters to respond to issues raised in the working document.

“It’s very important that each sister know that if she has anything she wants to tell me about her congregation she can do so freely and confidentially,” she said.

“We feel that every sister is a part of this visitation,” Mother Clare explained. “We won’t be able to meet individually with every sister in every congregation. We won’t know exactly what we will hear from sisters. We want them to know that their voices will be heard.”