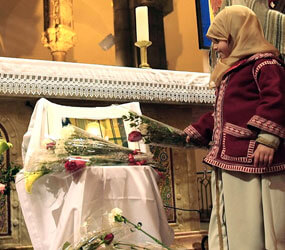 WASHINGTON – A man who worked at the Salesian mission where a young Polish missionary priest was found murdered was arrested in connection with the death.

The Tunisian Ministry of Interior reported that Chokori Ben Mustapha Bel-Sadek El-Mestiri, 43, was taken into custody Feb. 22, four days after the body of Father Marek Rybinski, 33, was discovered in a storeroom in a Salesian-run school in La Manouba outside the capital of Tunis, reported the Tunis Africa Press news agency.

Authorities said robbery was the motive for the killing and was not a sign of increased religious tension weeks after the ouster of the country’s autocratic president, Zine el-Abidine Ben Ali, 74, in January after days of peaceful protests.

Father Rybinski’s body was discovered by police after the director of the Salesian community in La Manouba became alarmed when he had not been seen for a day and his room was found empty.

In a statement, the Interior Ministry expressed “relief” that the murder “was not politically motivated.”

“The victim was dragged to a shed where he was beaten on the neck and head, which resulted in his death,” the statement said.

The missionary news agency Fides said Bishop Maroun Lahham of Tunis explained that Father Rybinski had given a worker about $1,300 for work at the school in November. When the work was not started, the priest began asking the worker for the money to be returned, the bishop said.

Before the arrest, Ali Aidoudi, Tunisia’s ambassador to Poland, assured the Polish government that a nationwide manhunt was under way for Father Rybinski’s killers, reported Polish Radio.

“The Polish priest was much loved in Tunisia,” the ambassador told the radio outlet.

Police had increased patrols around Christian churches since the murder was discovered, the Salesian Info Agency, ANS said.

The priest’s murder prompted demonstrations in support of the Salesian community Feb. 19 and 20 by hundreds of people including students from the school and their parents, ANS reported.

An estimated 15,000 people also took to the streets in Tunis, the Tunisian capital, Feb. 19 after news spread of the priest’s death.

The Islamist Ennahdha (Renaissance) group in Tunisia denounced the killing while calling for “vigilance in order to ward off anything that could spark anarchy in our country,” according to Polish Radio.

Father Lawrence Essery, the Salesians’ director in Manouba, said Father Rybinski had been appointed chaplain to the community by Archbishop Maroun Lahham of Tunis and spent time preparing children for confirmation. Father Rybinski arrived in the country in 2007, two years after ordination, he said.

“Father Marek was extremely efficient and through his contacts with the Polish Missions Office, where he had worked before his arrival in Tunisia, he was able to help to finance various projects for the good of the school,” Father Essery said.

A Mass in memory of Father Rybinski was celebrated Feb. 20 in La Goulette Church, where the Polish community meets. Attendees included members of the Tunisian foreign affairs and religious affairs ministries.