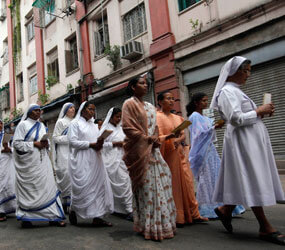 VATICAN CITY – Pope Benedict XVI singled out Indian women religious to praise them for their positive role in the church in their country.

In a speech to Indian bishops at the Vatican for their “ad limina” visits, made every five years, the pope said he wished to express his appreciation “in a particular way” for the women’s work in the Indian church.

These women religious, he said, “perform innumerable good works” that are often hidden but nevertheless “of great value to the up-building of God’s kingdom.” They should be encouraged in their dedication, and young women be encouraged to consider a vocation, he said.

The pope also told the bishops that they should be supportive of their priests, whom he called “your closest collaborators,” and be attentive to their spiritual, intellectual and material well-being.

Pope Benedict said that it was the job of each bishop to govern his diocese with prudence and charity and unify “his flock into one family.”

Through the preaching of the Gospel, celebration of sacraments and care for the pastoral work of the clergy, bishops are able to reach both the religious and the laity in their care, the pope said in the speech, released by the Vatican press office June 17.