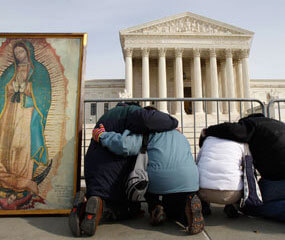 WASHINGTON – Laura Strietmann, the director of a Cincinnati crisis pregnancy center, calls abortion “the issue that is shaping our country,” and said the challenge for pro-lifers is to get everyone “to respect life again.”

In her work, she hears the stories of women’s pain and sees pregnant women in need who “are hungry for the truth about abortion,” she said. “When they come in the door, we need to love them and tell them the truth,” that abortion is taking a life, she added.

Strietmann, a member of St. Rose Parish in Cincinnati who is enrolled in a lay pastoral program at the archdiocesan seminary, believes no woman really wants to have an abortion but feels she has no other choice.

She spoke to Catholic News Service as she headed toward the March for Life rally site on the National Mall, where thousands of pro-lifers were gathering to mark the 38th year since the U.S. Supreme Court handed down Roe v. Wade legalizing abortion.

Bundled up against the cold, with the temperature hovering in the mid-20s, people streamed toward the rally site from various points, carrying all manner of signs, many of them homemade.

Among the messages were: “Choose life: Your mother did,” “Unborn babies feel pain,” Face it: Abortion kills a person,” “I regret lost fatherhood” and “Defund Planned Parenthood.”

“Abortion – a neat, quick easy way out for men,” read another. One couple waiting for the rally to begin held identical signs that read: “To the mother of our 4 adopted children: Thank you for their lives.”

Early in the morning, on the other side of the Capitol, volunteers in the parish hall at St. Peter’s on Capitol Hill began their day at 4 a.m., preparing a warm welcome for pro-life marchers who came by bus overnight. By day’s end they expected to have handed out 175 dozen doughnuts, served gallons of hot coffee and hot water for tea and hot chocolate, and given out numerous small containers of juice.

Chartered buses started arriving around 4:30 a.m. Pro-lifers come in waves throughout the morning and then headed down to the Mall. St. Peter’s also offered four Masses before noon.

Why do it? “Because the parish is always pro-life” and shows solidarity with the marchers, said volunteer Dr. Anthony Martinez, a physician who just returned from a volunteer medical mission to Haiti. He said he has seen the enthusiasm for the pro-life cause build “like a crescendo” over the years, especially among young people.

But laws on abortion won’t turn around “until the powers that be, the leaders of this country make logical decisions,” Martinez said, adding, “I believe in my heart it (Roe) will be overturned.” And prayer is the key.” Just like when he was a child, he recalled, and Catholics prayed for “for the conversion of Russia. It happened.”

“It’s a full expression of our faith,” said coordinator Suzanne O’Connor about the parish’s support for the pro-life marchers. She said the parish has provided hospitality since the first anniversary of Roe. But, she noted, it doesn’t happen without dozens of volunteers working throughout the day and helping with preparations in the days before.

Hours before March for Life participants arrived at the Supreme Court after the rally on the Mall, a woman walked back and forth in front of the court with her sign: “Choose Life: End the Death Penalty.” She declined to give her name to CNS but said she was a Catholic from Maryland who spends each Monday morning in front of the court as her way to draw attention to the issue.

“All life is sacred,” she said, and the death penalty “harms us all.”