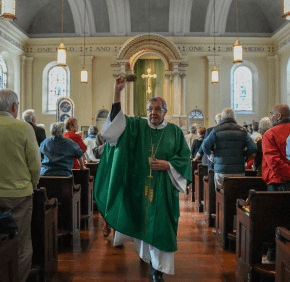 He was absent from a Mass marking the 175th anniversary of the parish he has led since 1975, but from the pews and the people in them, to the ambo and homily, the direction and touch of Father Richard T. Lawrence were apparent at St. Vincent de Paul Church in Baltimore Nov. 6.

For more than four decades, he has made the church at the bottom of the Fallsway a gathering place. His faithful embraced the liturgical reforms of Vatican II and saw that he was already on board with Pope Francis’ 2013 call for priests to embrace the marginalized and be “shepherds living with the smell of the sheep.”

The Baltimore native, 74, had a fall at his residence Oct. 7, leading to complications that left him hospitalized until Nov. 4, when he moved to a care center in north Baltimore.

St. Vincent de Paul Church, Baltimore, parishioners Michael Jacko, and his wife Kate Volpe, sing the closing hymn during their parish’s 175th anniversary Mass celebrated by Bishop Denis J. Madden Nov. 6. (Kevin J. Parks /CR Staff)
Bishop Denis J. Madden related a conversation he had with the man known as “Father Dick,” regarding what he should share in his homily at the jubilee Mass.

“He said, ‘Word. Sacrament. Service.’ That made my life a lot easier,” Bishop Madden said.

The auxiliary bishop noted the appropriateness of the opening hymn, “All Are Welcome.” Moments before it was offered, a disheveled man entered the church and shouted, “Glory to God! Alleluia.”

The parish-owned park on the south side of the church has long been a place where the homeless are not just abided, but assisted. As Catholic worshippers gathered, River Christian Fellowship’s Sunday meeting in the park included coffee and hot breakfast.

For the last decade, Our Lady of the Fields in Millersville has helped provide a Friday night meal at the parish. As Audrey Rogers noted, St. Mark in Catonsville and Our Lady of Perpetual Help in Ellicott City have joined that outreach, as well as other communities, such as Empowerment Temple and the First Unitarian Church of Baltimore.

It’s not just partners who go the distance, but parishioners.

“Most drive 20 minutes to worship here, some drive 40,” said Rogers, a member of the parish Liturgy Committee. “It’s truly an intentional community.”

Liz Hasan, who moved from Chicago five years ago to be near her grandchildren, makes the drive in from Parkville.

“It’s a place that’s dedicated to the Gospel and to service,” said Hasan, who serves on the Education/Enrichment Committee. “It carries the philosophy of Vatican II, and lets me, as a woman, have a voice.”

Ray Heil and Marcia Metzler make the trek from their home in Towson. Among other appealing factors, Heil, co-chairman of the Social Action Committee and a member of the board at Ss. James and John Catholic School, which the parish supports, noted Father Lawrence’s homilies.

“He’s the person who has convinced me that God loves me,” Heil said. “The love of God is the message. It’s one thing to talk about it. It’s another thing to experience and live it.”

It was a distinctive parish before Father Lawrence arrived, as noted in temporary displays in the vestibule honoring its pastors.

Father Charles Cantera distributes Communion during the 175th anniversary Mass of St. Vincent de Paul Church in Baltimore Nov. 6. (Kevin J. Parks | CR Staff)
St. Vincent de Paul describes its worship space as the “oldest Catholic parish church” in the city. Dedicated Nov. 7, 1841, it was built simultaneously with an orphanage. According to a parish guide, in the 1880s it was home to two schools and “boasted more organizations … than any other parish in the archdiocese.”

The orphanage was demolished in the 1970s and Catholic Charities of Baltimore continues that charism through St. Vincent’s Villa in Timonium, but the parish’s care for others continues.

As its November bulletin reported, over the first nine months of this year it has:

In addition, from March through September, its park “had 1,586 overnight guests.”
“We commemorated the feast of St. Vincent de Paul Sept. 25 with a giant cookout for the parish and the homeless,” said Laureen Brunelli, director of evangelization. “A lot who come aren’t homeless, but might be in need. We ran out of hamburgers.”

Homeless people rest at a park alongside St. Vincent de Paul Church on N. Front Street in Baltimore Nov. 6, the same day the parish celebrated its 175th anniversary. The parish has an active outreach to the poor. (Kevin J. Parks/CR Staff)
The bulletin included a greeting from Father Lawrence, which began, “While it is obviously a pain for me not to be with the community at this point, I have been with the community for so many points along the way. And it is nonetheless a memorable occasion that deserves to be properly designated and properly celebrated.”

Father Charles J. Canterna, a prison minister in residence at St. Vincent de Paul, concelebrated the Mass with Bishop Madden. The liturgy included the presentation of a medal bearing the Seal of St. Vincent de Paul Church to Jerome Bird, who was instrumental in the 1990s renovation of the church.

A parish and its pastor: A perfect fit at St. Vincent de Paul