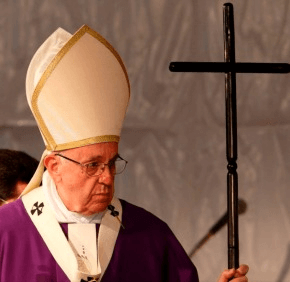 VATICAN CITY – When the search for profits outweighs all other considerations in society, money becomes a god who terrorizes humanity – excluding the majority of people and causing those still well off to build walls to cower behind, Pope Francis said.

“The entire social doctrine of the church and the magisterium of my predecessors rebel against money as an idol that reigns instead of serves, tyrannizing and terrorizing humanity,” the pope said.

Like all forms of terrorism, the terrorism of an economy focused only on making money relies on people’s fear for effectiveness, Pope Francis said Nov. 5 during a meeting at the Vatican with participants in the third World Meeting of Popular Movements, a collection of grassroots organizations of the poor, the underemployed, indigenous communities and farmworkers.

“When this terror, which is sown in the peripheries with massacres, pillaging, oppression and injustice, explodes in the centers with various forms of violence — including odious and vile attacks — the citizens who still have some rights are tempted by the false security of physical or social walls,” he said. “Walls that enclose some and exile others.”

Frightened citizens building walls on one side and frightened and excluded people on the other — “is this the life that God our father wants for his children?” the pope asked.

Wherever there is fear, he said, there is someone who will increase and manipulate it. “Because fear, besides being good business for merchants of weapons and death, weakens and destabilizes us, destroying our psychological and spiritual defenses, anesthetizing us to the suffering of others and, in the end, making us cruel.”

Pope Francis said mercy is the “best antidote” to fear. It works better than anti-depression medicine and is “much more effective than walls, iron bars, alarms and weapons. And it is free.”

Mercy and courage also are needed to respond to the huge wave of refugees, migrants and displaced people all over the globe, he said.

“No one should be forced to flee his or her homeland,” he said. “But the evil is doubled when, facing terrible circumstances, the migrant is thrown into the clutches of human traffickers to cross the border. And it is tripled if, arriving in the land where he or she hoped to find a better future, one is despised, exploited or even enslaved.”

Pope Francis urged members of the popular movements to lobby their governments to be more welcoming of migrants and to improve programs to ensure their integration into their host societies.

The political activism of the groups, he said, is important for ensuring true democracy and not simply an attitude where politicians address poverty without ever listening to or responding to the poor.

In democracies, he said, people who “seek the common good can defeat, with the help of God, the false prophets who exploit fear and desperation, who sell magic formulas of hatred and cruelty or selfish well-being and illusory security.”

When getting involved in politics, though, the pope said, members of the movement must guard against corruption.

All people are called to be honest, he said, but politicians and public servants have an even greater obligation. “The standard is very high: one must live the vocation of service with a strong sense of austerity and humility. This applies to politicians, but also for social leaders and for us pastors.”

Pope Francis said politics is not the place for “anyone who is too attached to material things or to the mirror, those who love money, lavish banquets, sumptuous houses, refined clothes, luxury cars.”

They don’t belong in the seminary, either, he said.

Seeking power or money “sullies the noble cause” of politics as service, the pope said.

“Fight the fear with a life of service, solidarity and humility on behalf of the people, especially those who suffer,” he said. “Against the terror, the best remedy is love. Love heals all.”

Saying that the Rev. Martin Luther King Jr. “always chose fraternal love, even in the midst of the worst persecution and humiliation,” Pope Francis quoted from one of the sermons of the civil rights leader:

“Hate for hate only intensifies the existence of hate and evil in the universe. If I hit you and you hit me and I hit you back and you hit me back and go on, you see, that goes on ad infinitum. It just never ends. Somewhere somebody must have a little sense, and that’s the strong person. The strong person is the person who can cut off the chain of hate, the chain of evil.”