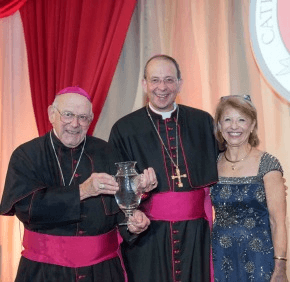 By Christopher Gunty
editor@CatholicReview.org
ARLINGTON, Va. – What started as correspondence courses by mail more than three decades ago is now an online university that awards degrees in Catholic theology to students around the world.
Catholic Distance University moved its headquarters from Virginia to Charles Town, W.V., in 2014, but continues to educate students in all 50 states and more than 60 countries in graduate certificate programs and associate’s, bachelor’s and master’s degree programs. CDU claims to be the only all-online Catholic university in the United States.
At its annual gala Nov. 5 in Arlington, the university recognized the Knights of Columbus Supreme Knight Carl Anderson and Archbishop William E. Lori of Baltimore, the Knights’ supreme chaplain, for their contributions to higher education with the Founder’s Award, CDU’s highest honor.
Dr. Marianne Evans Mount, university president, noted the early and enduring connections between CDU and the Knights. Begun as the Catholic Home Study Institute in 1983, the courses were offered by mail. This was similar to a project the Knights of Columbus had been doing, offering short home-study courses about the Catholic faith and its teachings via weekly ads in Parade magazine. The Knights provided a lot of support early on in CHSI’s cycle by mailing the institute’s materials to students.
When it began offering a master’s degree in theology in 1996, the institute changed to Catholic Distance University. Now, far-flung students participate in online classes. It’s not unusual for a thesis adviser to work with a doctoral candidate half a world away via email and Skype.
In bestowing the Founder’s Award on Archbishop Lori, Bishop Paul S. Loverde, apostolic administrator of Arlington, praised Archbishop Lori “for his wisdom, his courage, his example as the supreme chaplain of the Knights of Columbus, and as a supreme teacher of the church, in the sense that he teaches so beautifully and wisely,” locally and around the world.
Archbishop Lori said he thought that his award rightly belonged to the Knights of Columbus, the largest lay Catholic organization in the world. He said he was happy to be honored along with Carl Anderson and is pleased to be involved with the Knights and their Gospel principles of charity, unity, fraternity and patriotism.
The archbishop said that when we think about the issues our church is facing in the United States and the challenges to religious liberty, “we also realize how important it is to have a large number of people – a growing number of people – who understand what the church teaches about religious freedom in a very deep and principled way.”
He added that there need to be a lot more people who understand our heritage as Americans. “I certainly see CDU as a great ally in this challenging time that we are in.”
Bishop Loverde, who also serves as chairman of the board of CDU, presented a second Founder’s Award to Carl Anderson “for his inspiring, courageous leadership of the Knights of Columbus and generous support of Catholic Distance University to educate the domestic church in a digital world.”

Anderson said it was an honor and privilege to receive the award because CDU is visionary and “very, very important for the future of our Catholic faith community in America because it is an educational project that understands the creative opportunities of our new technology, but also understands that even with this new technology, we need Catholic education that forms the entire person.”
CDU conferred 26 academic degrees, including 10 master’s degrees, this year. Several graduates from around the country attended the dinner and the academic convocation Mass that preceded it.
Julie St. Croix, coordinator of pastoral leadership formation for the Archdiocese of Baltimore, won one of two door prizes at the gala – a rosary with emerald beads hand-made by Mary A.D. Petrino, a longtime CDU supporter. Archbishop Lori blessed the rosary at the end of the event.

Defending the faith, helping poor are dual calling for Knights of Malta