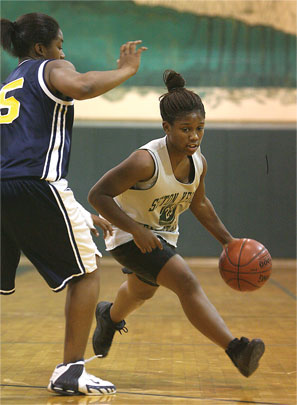 The Seton Keough High School, Baltimore, Head Coach Jackie Boswell has been looking forward to this basketball season since her seniors were freshmen.

“The team just looks so good, and I love their attitude,” said Boswell, who has coached these players for the past four years, including off-season AAU competition.

“So much game exposure over the years has made us stronger and more confident,” Boswell said. “If the team stays focused, I think we will be very, very good.”

The Gators are led by senior point guard BJ Williams, a Division I prospect. “I think BJ is one of the top point guards in the state,” said Boswell. “She just loves to play the game.”

Williams, a team captain, will be looking to score more this season but is known for her savvy ball distribution.

Just this past week, Williams along with teammate Ayana Lee, a senior, were nominated as McDonald’s All-Americans. Williams and Lee are the first two Seton Keough students to be nominated in the school’s history. The final decisions will be made in February, but if they are selected they will play in the prestigious McDonald’s All-American game in March 2008. Lee already has announced an early decision to attend Drexel University next year while Williams is undecided.

The Gators’ leading scorer from the 2006-2007 season is 6-foot-4 junior Asya Bussie. Bussie has been training hard in the off-season and will be known as one of the strongest post players in the IAAM. In addition to her skills under the basket, Bussie has brought a soft jumper to her game.

With five seniors on the team, Coach Boswell also has brought in four freshmen to the varsity program. One freshman in particular, 6-foot-3 Liz Brown, will provide a daunting presence underneath, but Boswell’s first player off of the bench looks to be freshman Amber Singletary from St. Mark, Catonsville.