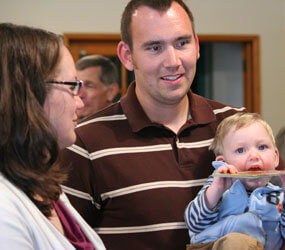 PEORIA, Ill. – Boxes wrapped in ribbon and a happy little boy are Christmas images, but the combination had another joyful meaning Dec. 11 during ceremonies closing the Diocese of Peoria’s inquiry into an alleged miraculous healing through the intercession of Archbishop Fulton J. Sheen.

“May God, who has begun this great work, bring it to fulfillment,” said Peoria Bishop Daniel R. Jenky after affixing a wax seal on a box containing evidence gathered in the past three months by an investigative tribunal. The assembly gathered for the special Mass at St. Mary’s Cathedral responded with sustained applause.

That evidence is now on its way to Rome for consideration by the Congregation for Saints’ Causes. The congregation is studying the sainthood cause of Archbishop Sheen, a central Illinois native and priest of the Peoria Diocese who became an internationally known evangelist, radio/TV personality, writer and missionary.

In a pew just outside the cathedral sanctuary, the focus of the testimonies contained in the box – 15-month-old James Fulton Engstrom – sat contentedly with his parents and two older siblings, squirming occasionally as all healthy little boys will do.

“For a lot of us it felt like a full-circle moment,” said James’ mother, Bonnie Engstrom, of the official ceremonies that took place at the start of Mass. Among those in attendance were members of the tribunal as well as the Archbishop Sheen Foundation.

Bonnie Engstrom recalled sitting in the same cathedral – where Archbishop Sheen had been ordained in 1919 – a few days after James’ birth and “begging for a miracle” during a holy hour attended by family and friends.

Considered stillborn on Sept. 16, 2010, after a routine pregnancy, James was without a pulse for the first 61 minutes of his life. It was only when doctors at OSF St. Francis Medical Center in Peoria were ready to call the time of death that his heart started beating. The doctors had warned the parents he might not be able to function normally, but they were proved wrong.

“It’s an amazing story,” said Monsignor Jason Gray, who served as episcopal delegate to the investigative tribunal and was responsible for guiding the process. An oath of secrecy sworn by tribunal members kept Monsignor Gray from commenting further about the findings of the tribunal or expectations regarding its review in Rome.

But family members are free to talk, and Travis and Bonnie Engstrom – residents of Goodfield and members of St. Luke’s Parish in Eureka – have widely shared the story of their son and how they believe he is alive and well because of a healing by Christ and the intercession of Archbishop Sheen.

The Engstroms were familiar with the famed orator – perhaps best known for his popular “Life Is Worth Living” television show seen by millions in the 1950s – and Bonnie had asked him to watch over her pregnancy. They decided that if their baby was a boy, his middle name would be Fulton. Travis made good on that intention during an emergency baptism as they awaited an ambulance after James was born in crisis at their home.

Bonnie remembers praying to Archbishop Sheen as CPR was performed on her newborn son, and asking family and friends to seek his intercession when doctors warned James might be blind and unable to function normally after his heart began beating.

Fifteen months later, James is medication-free, has just been released from physical therapy, and continues to meet growth milestones.

“He’s just a normal kid,” said Bonnie, who credits Christ with healing her son “for his greater honor and glory.”

She told The Catholic Post, Peoria diocesan newspaper, that she and her husband were “amazed and impressed” by the thoroughness of the tribunal’s inquiry. The evidence includes both medical records and witness testimonies.

“With every step they wanted to flesh out the details, and do it with integrity and honesty,” said Bonnie. “Not that we wouldn’t expect that from the church, but the extent was really impressive.”

A large painting of Archbishop Sheen was placed in the cathedral sanctuary near the Advent wreath for the Dec. 11 Mass and ceremonies. Among the concelebrants was Father Andrew Apostoli, a Franciscan Friar of the Renewal from New York who is vice postulator for the cause.

Patricia Gibson, chancellor of the Diocese of Peoria, invited tribunal members into the sanctuary for the ceremonies, and Bishop Jenky was assisted in sealing the boxes with traditional hot wax by Monsignor Stanley Deptula, executive director of the Sheen Foundation.

A second box of original copies was sealed to be preserved in the archives of the Diocese of Peoria.