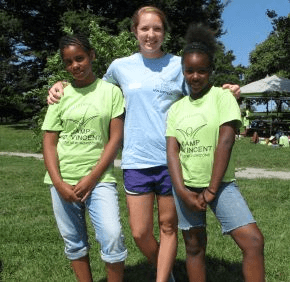 An annual report quantifies the positive impact of Camp St. Vincent on the homeless kids it serves.

The positive impact on the volunteers and staff of the summer day camp, however, is best described with their own testimony.

“I know I’m not going to get rich,” said instructor Jamar Willis, who has been teaching at the camp, located at 242 S. Patterson Park Ave. in East Baltimore, for five years. “I do it because I love it – I love these kids.”

Brooke Holechek, who graduated from Notre Dame Preparatory School in Towson in May, said that she “couldn’t stop coming back” to Camp St. Vincent after first volunteering with a friend several years ago.

“I just feel like it’s not really a summer if I’m not here,” Holechek said. “These kids get really attached to you. The first day you come, they want to be your best friend.”

Students from Catholic high schools in the greater Baltimore area such as Holechek make up the bulk of Camp St. Vincent volunteers.

“We have breakout sessions at the end of the day to help the volunteers process what they’ve experienced,” said John Schiavone, president and CEO of St. Vincent de Paul of Baltimore, the parent organization of the camp.

“In many cases, they get as much out of it as the kids they’re serving,” Schiavone said, “which fulfills the mission of St. Vincent de Paul.”

Camp St. Vincent, according to the 2014 annual report of St. Vincent de Paul of Baltimore, helps 96 percent of the campers it serves maintain or increase their reading skills. Sixty-four percent keep or build their math skills.

Camp St. Vincent literature states that “summer learning loss” is a problem for children, who can fall up to two months behind in reading and math over the summer. For homeless children, the loss “occurs at more than twice that rate,” according to Camp St. Vincent.

Ten-year-old April Fauntroy should be good to go in September when it comes to math. She said that she enjoys the challenge of multiplying large numbers “because it’s fun.”

She also looks forward to the camp’s Friday field trips, which are a reward to the students for persevering in academics for the rest of the week. Fauntroy’s favorite outing so far has been a trip to the movies to see Pixar’s “Inside Out.”

Funded largely through foundation grants and individual donations, Camp St. Vincent is located directly across from the west side of Patterson Park, where the kids take advantage of the ample greenspace when not in air-conditioned classrooms.

More than a place to get wet, the Patterson Park pool is another site of learning for the homeless kids, who often arrive at camp without the life-saving ability to swim.

“You’ll see the kids grow throughout the summer,” said Sarah Egan, camp director. “They go from no skills whatsoever to moving all over the pool with confidence.”

According to Schiavone, the camp began in 1906 as a Fresh Air Fund camp for inner-city kids. It more recently began to focus exclusively on homeless children, who are bussed from 17 sites in Baltimore City and Baltimore County.

On any given day, the camp, which runs June 22 through Aug. 14, serves 185 children ages 5 to 14. In 2014, a grant from the Harry and Jeanette Weinberg Foundation allowed Camp St. Vincent to expand to serve middle school kids ages 12 to 14.

“Children end up homeless for a variety of reasons,” Schiavone explained. “For the most part, it’s economically driven. You just have families that fall into trouble and don’t have a support system to rely on.”

All of the instructors at Camp St. Vincent work for Baltimore City Public Schools during the school year, according to Egan.

Assistant director Robert Spencer, on his sixth year at Camp St. Vincent, said that his summers at the camp have helped him improve as a fifth-grade teacher at Robert W. Coleman Elementary School in West Baltimore.

“I’ve found that I have a lot more patience in the classroom,” Spencer said.

Even as a native of West and Northeast Baltimore, he has learned something about perspective.

“I thought I had, in a sense, ‘gone through it all,’ ” he said, “until I saw some of the situations these kids have come up in.”