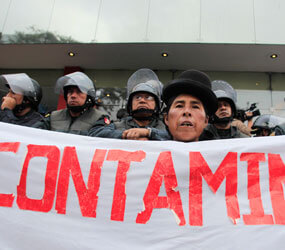 LIMA, Peru – When Archbishop Pedro Barreto Jimeno of Huancayo first considered the high lead levels in the blood of children living in the Peruvian highland city of La Oroya, he asked himself, “What would Jesus do?”

Five years ago, the U.S.-owned mining company Doe Run was running a minerals smelter complex that was mainly responsible for the poor air quality in the fifth-most polluted city in the world, the archbishop told delegates at an international Latin American bishops’ council seminar on extractive industries. The archbishop told delegates he answered his own question by beginning an ultimately successful campaign to close the complex.

Now, as the new president of the Latin American bishops’ council department of justice and solidarity, Archbishop Barreto has a four-year mandate to encourage the Latin American church to consider and act on the question at the root of his ministry.

During the three-day seminar sponsored by the council, known by its acronym CELAM, 80 church representatives from Latin America said they would seek dialogue with U.S., Canadian and European bishops on extractive industries and the mission of the church and strengthen links with the Pontifical Council for Justice and Peace. They also called on northern countries to value the rich Latin American biodiversity that is threatened by extractive industries.

The seminar’s final statement noted an accelerated expansion of extractive industries fed by “a fossil-fuel energy model, the pursuit of profit at any cost and a surge of materialistic greed.”

Jose de Echave, a Peruvian analyst attending the conference, said that, with an average profit margin of 37 percent, the extractive industries are the most profitable in the world and that 27 percent of world mining, oil and gas investments are in Latin America.

The Lima seminar focused on the environmental impact of this rush on the continent’s natural resources, the erosion of fragile democratic institutions by corrupt practices introduced by some foreign companies and social conflicts, and the violation of the right of communities to resist extractive projects on their territories. It acknowledged that mining provides jobs but stated that these are usually few and short-term and that taxes paid by international mining companies in Latin America are often very low.

The final statement called on the governments of Latin America to adequately regulate extractive industries, inform affected communities and provide independent environmental impact assessments prior to the launch of projects.

Bishop Jose Rauda Gutierrez traveled to Lima from his diocese of San Vicente, El Salvador. Canadian-based Pacific Rim Mining has sued the government of El Salvador for US$77 million after it canceled the widely contested open-pit gold mine concession in his diocese.

While he was in Lima, Bishop Rauda and San Salvador Auxiliary Bishop Gregorio Rosa Chavez received, solemn-faced, news that the body of an anti-mining activist had been found on an isolated rural road in the Salvadoran department of Cabanas. The murder of Juan Francisco Duran Ayala was the fourth in two years of anti-mining activists in El Salvador.

The CELAM conference statement said the bishops’ council will seek to strengthen links with human rights defenders who are threatened or persecuted.

“Extractive activities are mainly carried out by private transnational companies and, in the face of their economic might, national governments and their sovereignty are weakened, especially at local government levels,” said the CELAM statement, noting an “increase in corruption and a weakening of governance, as well as the judicial system.”

For Pedro Landa of the Honduran Center for Alternative Development, it is difficult to find a better example than Honduras of this trend.

“International mining companies have fed corruption in Honduras,” Landa told the seminar. “They have bought off judicial officials and corrupt politicians to get what they want.”

Landa referred to his organization’s work to document environmental contamination caused by the Goldcorp-owned San Martin mine and a subsequent lawsuit against two representatives of the Honduran subsidiary Entre Mares and two government officials. All were acquitted of environmental charges, in a ruling that did not respect Honduran law, Landa said.

The San Martin open pit gold mine in Honduras, now closing down, also dried up much of the population’s water supply, as the mining process uses so much water.

Another issue raised is that of free, prior and informed consent of indigenous communities, a right set out in Convention 169 of the International Labor Organization, ratified by most Latin American governments.

“The church calls on states, prior to authorizing the launch of any extractive activity, to guarantee a previous consultation, as well as an environmental impact study … and to inform the population adequately about the results of such studies,” said the CELAM document.

Oblate Father Edgar Nolasco spoke to the conference of the consequences of the Peruvian government’s failure to consult with the indigenous population in the Napo area of the Peruvian Amazon about a French transnational oil project. In 2009, the government authorized Perenco, a French transnational, to drill 14 oil wells in the middle of a heavily populated area, without any prior consultation with the population.

The CELAM conference committed the church to playing a role in informing communities about the benefits and disadvantages of extractive industries, using church radios and other media.

“In this way, the church wishes to contribute to the population being informed and taking a well-founded and critical decision, offering alternative proposals to defend its rights via arguments and dialogue,” the document said.

Note: Mary Durran, a former CNS correspondent, attended the CELAM conference as a staffer at Development and Peace, the Canadian Catholic aid organization.