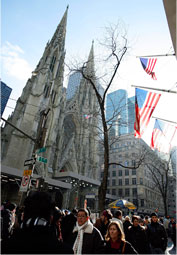 WASHINGTON – Those who put stock in the expression “an idle brain is the devil’s workshop” can take heart that American Catholics won’t give the devil much to work with in a very busy 2008.

Four archdioceses – Boston, New York, Philadelphia and Louisville, Ky. – will be celebrating their 200th anniversaries with special events slated throughout the year. The archdioceses were erected from the Baltimore Archdiocese in 1808.

New York Catholics will also have major church events April 18-20 when Pope Benedict XVI visits their city as part of his six-day visit to the United States.

During the pope’s New York stay he will address the U.N. General Assembly, participate in an ecumenical event, celebrate a Mass for priests, deacons and religious, meet children with disabilities and join a youth rally.

He is also scheduled to visit ground zero for a ceremony with responders to the 2001 terrorist attack and victims’ family members. The pope will conclude his visit by celebrating Mass at Yankee Stadium.

Prior to the New York visit the pope will spend two busy days in Washington for a White House reception, a visit with the U.S. bishops, a Mass at Nationals Stadium, a meeting with Catholic educators and an interreligious gathering.

Another foreign trip the pope has scheduled for 2008 is for World Youth Day in Sydney, Australia, July 15-20. By mid-December 100,000 pilgrims – including 38,000 from the U.S. – were registered for the event with large contingents attending from the United States, Italy and Germany.

A few weeks after World Youth Day concludes, the Summer Olympics will begin in Beijing, and once that coverage wraps up everyone will be narrowly focused on the 2008 elections – if they weren’t already.

In anticipating, and trying to ward off, Catholic voter confusion, the U.S. bishops wrote a 10,000-word document on political responsibility, “Forming Consciences for Faithful Citizenship,” overwhelmingly approved during the bishops’ fall meeting.

The document is part of a series that has been issued before every presidential election for more than 30 years. “Faithful Citizenship” outlines for voters in 2008 seven key themes: right to life and dignity of the human person; call to family, community and participation; rights and responsibilities; option for the poor and vulnerable; dignity of work and the rights of workers; solidarity; and caring for God’s creation.

The document has received a mixed reaction. Some praised it for its clarity and emphasis on the needs of the poor; others said it was not strong enough in condemning Catholic politicians who take positions contrary to the church on abortion, embryonic stem-cell research and other life issues.

U.S. Catholics will be taking a close look not only at where candidates stand on those issues but also at how politicians respond on major issues that intersect with Catholic teaching such as the ongoing war in Iraq, immigration, marriage and civil unions, and capital punishment.

Opposition to the death penalty made news at the end of 2007, with New Jersey’s abolition of capital punishment signed into law by Gov. Jon Corzine Dec. 17 and a vote by the U.N. General Assembly the next day calling for a moratorium on executions.

The topic will continue to be on the front burner at the beginning of 2008 as the U.S. Supreme Court hears arguments in a Kentucky death-penalty case Jan. 7. The ruling on this case will determine the constitutionality of lethal injection and whether the most commonly used combination of drugs for lethal injections constitutes cruel and unusual punishment. Until the court rules, more than a dozen states have stopped executions.

Congress failed to pass immigration reform legislation in 2007 and will likely steer clear of the issue during an election year, but that does not mean church officials will keep quiet about it.

At year-end, bishops in Oklahoma, Maryland and California called for action on immigration, stressing the human rights of undocumented people and their need for an opportunity to legalize their status. Los Angeles Cardinal Roger M. Mahony wrote letters to all the presidential candidates in December urging them to “show leadership on the issue of immigration” and to replace verbal attacks on immigrants with a focus on policy solutions.

In November, the need for embryonic stem-cell research was called into question by studies showing that human skin cells can be reprogrammed to work as effectively as embryonic stem cells, whose use has long been opposed by the church because it involves the destruction of human embryos.

But since studies alone may not be enough to change public opinion, several state Catholic conferences were waging campaigns and educational programs against funding for embryonic stem-cell research.

The bishops will also continue to speak out against state legislatures seeking to legalize same-sex civil unions and denounce U.S. involvement in the war in Iraq which they have already described as “unacceptable and unsustainable.”

In 2008, the new structure of the U.S. Conference of Catholic Bishops will be in place with a $147.7 million budget, a 16 percent reduction in the diocesan assessments and a reduction in staff of about 70 people.

Across the country some dioceses will continue to be impacted by the church sex abuse scandal as they make payments on multimillion-dollar settlements reached with abuse victims and modify the ministries they provide.

Judge Michael Merz, chairman of the National Review Board, said the church’s response to the abuse crisis will be ongoing. “Church efforts for prevention, healing and vigilance will be demanded for the rest of our days,” he said in a December statement coinciding with the group’s five-year report on the abuse crisis.