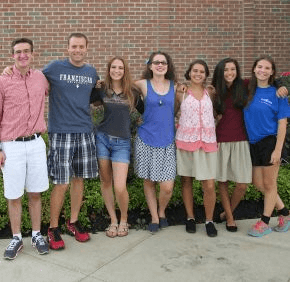 At St. John Parish in Westminster, youth ministry strengthens the body, along with the spirit.

In addition to sending a substantial presence to the Steubenville Youth Conference, Mount 2000 and similar retreats, the nearly 100 members of its Life Teen group have had the opportunity to hike the Blue Ridge in Frederick County and bike the North Central Railroad Trail in Baltimore County.

“Lights Out Dodgeball” and “Water Olympics” also dot the calendar maintained by youth minister Kevin Brown, who will accompany six of his teens on the Pilgrimage of Love and Mercy, which will leave the Basilica of the National Shrine of the Assumption of the Blessed Virgin Mary in Baltimore Sept. 20 and step into Philadelphia a week later after a week of walking.

The Sept. 27 finish line offers the prospect of a glimpse of Pope Francis, who will culminate his first visit to the U.S. with a Mass expected to draw as many as a million along Benjamin Franklin Parkway.

“I love the pope, and the sacrifice of walking all the way there will bring me closer to Christ,” said Shanon Pieper, who also draws inspiration from the Blessed Mother. “I am not a super active person, but every time I question whether I can make it, I think of Mary. If she can walk 90 miles to see her cousin Elizabeth and be pregnant at the same time, I can walk 100 miles to see the pope.”

Actually, it will be closer to 108 miles, but it is the unquantifiable spirit of pilgrims such as Pieper that matters.

“They help in various roles,” said Brown, the youth minister. “They help run the youth group, give testimony, lead small groups and perform skits at our confirmation retreat, giving witness to their fellow teens.

The St. John contingent includes Milstead’s sister, Madelyn, and another 15-year-old, Jamie Link. The Milsteads and Link are educated through the Christiana Homeschool Academy. Besides guiding the schooling of her daughters, Catherine Milstead will bring her 12-passenger van to Philadelphia, and bring home pilgrims Sept. 27.

This is the fourth straight year a Milstead has walked with Father John J. Lombardi, pastor of St. Peter in Hancock and spiritual leader of the pilgrimage, which is sponsored by the Archdiocese of Baltimore and Catholic Review Media, and its charitable component, the “Feet for Francis” shoe drive. Family members joined Father Lombardi on his Fortnight for Freedom pilgrimages in 2012 and ’13, and an older Milstead sibling, Danielle, joined him on a 2014 pilgrimage to Paris.

While Brown credits adult volunteers with helping Life Teen and its middle school group, EDGE, flourish, all of that energy is focused by the youth minister whose own life has been marked by extraordinary level of commitment.

“We had a fine youth group when Kevin (Brown) got here, and he has taken it another level,” said Monsignor James P. Farmer, the pastor of St. John Parish. “Kevin and his wife are an amazing couple. They bring an extraordinary spirit.”

Andrea Hussle Brown was raised in St. Joseph Parish in Sykesville. She met her husband when both were undergraduates at Franciscan University of Steubenville, Ohio. They honeymooned in Rome, where St. John Paul II, the Holy Father, blessed their April 2002 marriage.

The Browns served as missioners for three years in Mexico and six months in Peru, where a planned two-year stay was cut short by a pregnancy that had them return to her native Carroll County, where he became St. John’s youth minister in October 2012.

As to the active elements of the Life Teen calendar in Westminster, it doesn’t hurt that Kevin Brown grew up in Oregon, where running is a way of life. He ran cross country in high school and would have at Franciscan U., had it had a program when he got there in the late 1990s.

Monsignor Farmer will mark the papal visit as a concelebrant of the Sept. 23 canonization Mass of Blessed Junipero Serra in Washington, D.C., and monitor the progress of his youth group as they make their way through the Archdiocese of Baltimore, Diocese of Wilmington and Archdiocese of Philadelphia.

“This pilgrimage represents a wonderful commitment,” Monsignor Farmer said. “Father Jack (Lombardi) is a good friend, and I’m excited that our teens have the opportunity to spend a week with him. A number of our kids are considering religious vocations. This is going to bear fruit down the road.”