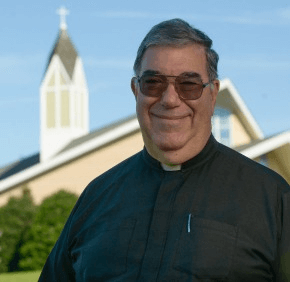 By Erik Zygmont
ezygmont@CatholicReview.org
Twitter @ReviewErik
Sister of Notre Dame de Namur Rosalie Murphy, the first woman to lead a major division at the Catholic Center in Baltimore, was remembered for her professional excellence, her compassion and her ability to arrive at solutions to complex and pressing problems.
A funeral Mass will be offered Sept. 18 at 10 a.m. at Villa Assumpta in Baltimore for Sister Rosalie, who died Sept. 12. She was 90.
In 1977, Sister Rosalie was recruited by then-Baltimore Archbishop William D. Borders to the archdiocesan Division of Collegial Services, which she directed from 1977 to 2000, even as it became the Division of Pastoral Councils in 1983 and the Division of Planning and Council Services in 1992.
“She combined leadership skills with the capacity to listen well, and she had the patience to endure difficulties in arriving at consensus,” the retired archbishop, who died in 2010, told the Catholic Review in 2000.
Charged with developing and maintaining a working relationship between the clergy, religious and laity to carry out the church’s mission, she did so at a time especially difficult for city parishes, as residents exited Baltimore in droves.
“Sister Rosalie had a keen understanding and appreciation of people who lived in the city, and was extremely helpful,” said retired Bishop John H. Ricard, S.S.J., who served as Baltimore auxiliary bishop in the midst of that turbulence, from 1984 to 1987.
“Through her and with her, we were able to coordinate planning among parishes as we approached the many issues and problems the city faced,” he added.
Sheila Kelly, who directed what is now the archdiocesan Department of Human Resources concurrent to Sister Rosalie’s administrative service, said Sister Rosalie “really was sort of an advocate for people who were underrepresented.”
“In some cases, that was women,” Kelly said. “In some cases, that was the laity. In some cases, it was the Korean community, trying to find its way.”
Sister Rosalie’s colleagues noted her compassionate, respectful treatment of all, regardless of status.
“She was able to meet people at all levels,” Kelly said. “That was from cardinal down to the front desk.”
Sister of Notre Dame de Namur Edithann Kane, who worked closely with Sister Rosalie in the 1970s and early 1990s, remembered that her former boss “was always determined that if there was a problem, she could solve that problem.”
“She would just keep saying, ‘There has to be a way,’” Sister Edithann remembered.
Wilmington (Del.) Bishop W. Francis Malooly, who served as Baltimore auxiliary bishop from 2000 to 2008, called Sister Rosalie a “very good, solid, spiritual woman,” who was “gentle but firm.” Before he became bishop, Bishop Malooly had directed the archdiocesan Division of Clergy Personnel, working on a collegial level with Sister Rosalie.
Born in 1925 in Chester, Pa., Sister Rosalie entered the Sisters of Notre Dame de Namur in 1943. She taught from 1946 to 1962, serving at St. Ursula in Baltimore among other institutions.
From 1962 to 1969, Sister Rosalie served as Director of Juniors for the Maryland Province of her order, ministering to newly professed Sisters of Notre Dame de Namur.
After her six years as provincial, she directed religious education for a Staten Island parish and earned a master’s degree in futures studies from the University of Houston.
Sister Rosalie received the papal honor, the Cross pro Ecclesia et Pontifice, in 1991. She also received the Yves Congar Award from the National Conference of Pastoral Planning and Council Development in 1997 for her promotion of the laity.
Sister Edithann remembered her friend’s fondness for keeping up with the daily news as well as her ability to be punctual – but just barely. In the days of Friendship International Airport, the predecessor of Baltimore-Washington International Thurgood Marshall Airport, Sister Rosalie “had this great facility of always leaving at the last minute, but somehow always getting there right on time to not only get a ticket, but to get a standby ticket for clergy.”
“She wasn’t usually the first at things,” Sister Edithann joked, noting that her colleague was often lost in reading or absorbed in a problem she was trying to solve.