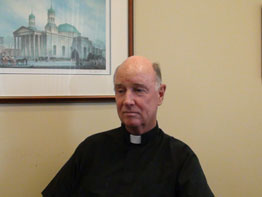 HAGERSTOWN – When Pope John Paul II named Bishop W. Francis Malooly an auxiliary bishop of the Archdiocese of Baltimore, the new bishop immediately got in his white Honda Accord and made a whirlwind tour of some of the parishes of his assigned vicariate in the western part of the state. For the next seven years, the roving bishop racked up mileage as he made regular stops to 46 parishes in Carroll, Howard, Frederick, Washington, Allegany and Garrett counties.

For many, the smiling bishop became the face of the archdiocese – celebrating the sacraments, helping pastors with difficult challenges and being a constant presence for the people.

More than 250 parishioners from across the vicariate gathered at St. Ann in Hagerstown Aug. 10 to honor Bishop Malooly with a farewell Mass as he prepares to be installed as the new bishop of Wilmington, Del. Some from the Frostburg and Cumberland areas arrived 20 minutes late after getting stuck in eastbound traffic clogged with returning vacationers from Deep Creek Lake. They weren’t going the let congested roadways stop them from thanking Bishop Malooly for his years of service.

“We just had to be here,” said Casper R. Taylor Jr., a parishioner of St. Mary in Cumberland and the former longtime Speaker of the House of Delegates.

Bishop Malooly was a beloved figure in Western Maryland because he cared about the people, understood the issues and took practical steps to address the challenge of declining population in parts of Allegany and Garrett counties, Mr. Taylor said.

“He was magnificent in the way he brought so many of these small, troubled parishes to come together to make it work,” said Mr. Taylor. “So much of that is done by personal involvement – one-on-one involvement, eyeball to eyeball.”

Bishop Malooly wasn’t afraid to take on difficult issues, Mr. Taylor said. He provided leadership in Cumberland in the closing of St. John Neumann School and its consolidation with Bishop Walsh School on Haystack Mountain.

“They are always very difficult issues to deal with,” Mr. Taylor said.

Linda and Larry Webster, parishioners of St. Joseph in Taneytown, wanted to honor Bishop Malooly for the many times he visited their small faith community.

“He’s always very jovial when he comes,” said Mrs. Webster. “He always has a little joke, which goes over well in our parish because we’re used to our pastor’s jokes.”

Mrs. Webster said the bishop has a gift for relating to people.

“I think the spirit of the Lord shines forth from him,” she said.

Monsignor Paul Byrnes, retired pastor of St. Michael in Frostburg, was one of more than 25 priests and deacons who attended the Mass. Clergy have a profound respect for Bishop Malooly, Monsignor Byrnes said, because he is a hardworking, sincere leader.

“I think he’s incorruptible, so I wanted to honor him for that,” the priest said.

“The victory over doubt and the storms of doubt depends very much on our focus,” Bishop Malooly said.

The bishop identified three ways to maintain a focus on Christ: pray everyday, use talents in service of God and be the face of Christ for others. Those are the three themes he championed at every confirmation. Many of those he confirmed, including the altar servers at his farewell Mass, attended his farewell celebration.

Archbishop Edwin F. O’Brien, who spoke at the end of the liturgy, said Bishop Malooly provided critical support and advice when Archbishop O’Brien was installed in Baltimore on Oct. 1, 2007.

“What an impact he had on our archdiocese,” said Archbishop O’Brien, noting that the bishop “gave himself so generously.” As difficult as it is for Baltimore to lose Bishop Malooly, Archbishop O’Brien said the bishop’s new assignment will allow him to share his talents and priesthood in a broader way.

On the same day Baltimore’s Michael Phelps earned a second gold medal in swimming at the Olympics in Beijing, Father C. Douglas Kenney, pastor of St. Ann, awarded Bishop Malooly his own glittering medal before the congregation said the closing hymn, “Now Thank We All Our God.”

Called the “St. Ann Medal,” the award recognizes parishioners for outstanding service. Bishop Malooly wore it at a reception following the Mass.