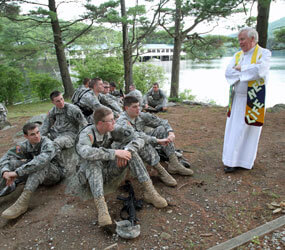 WEST POINT, N.Y. – Augustinian Father Edson Wood has a campus ministry assignment like none other.

As brigade chaplain at the U.S. Military Academy, he is responsible for making sure that 4,400 college students have the opportunity to follow their religious traditions.

While most cadets identify themselves as Catholics or Protestants, Father Wood said there are more than 70 denominations and religious traditions represented in the student body.

“Each is important and requires certain attention,” he said, even if there are only two or three adherents.

The academy is a rigorous training ground for future U.S. Army officers. It is also a highly selective four-year coeducational federal undergraduate liberal arts college that draws students from all 50 states and 14 foreign countries.

Father Wood is one of three Catholic priests at West Point. He is a civilian who was appointed to his position in 2002 by the president of the United States. Father Wood said he is the first Catholic brigade chaplain in the school’s 209-year history. He arrived at West Point as a summer replacement in 1993 after 25 years in education. And he’s still there.

“There’s a sense of privilege in knowing young men and women who are dedicating themselves to a particular ideal in support of the country and the belief that they are doing what God wills for them,” Father Wood said in an interview with Catholic News Service.

Father Wood said the West Point student body, known as the Corps of Cadets, has a “lot more orderliness in daily life and not much freedom to goof off,” but the young adults have a lot in common with their civilian peers. “Human beings are human beings even when they wear a uniform and tramp around in the woods and train a lot. They have fears and problems and family issues and they need time and attention and someone to listen,” he said.

West Point is a military post and home to faculty and staff at the college. It also has an active Catholic parish, Most Holy Trinity, which was founded in 1899. The stone church is perched on a palisade with a commanding view of the Hudson River. The building is owned by the Archdiocese of New York and leased to the government, but the parish is part of the Archdiocese for the Military Services, according to its pastor, Monsignor Brian Donahue. The parish serves military and civilian employees of West Point, as well as cadets.

Monsignor Donahue said the “vibrant” Catholic program at West Point benefits from “the spirit of the place and the cadets. It’s a total formation program. The whole movement is to be of service to others. The cadets are trained to be leaders and they demonstrate that in many ways – as leaders in the community, the military and their faith groups.”

He said Catholic cadets mold and support one another in their faith. “I provide the sacraments and faith guidance. I’m mentoring leaders who are leading and they take this to their peers and that’s how the faith grows. Peers form peers.” Monsignor Donahue said.

“West Point is one of the world’s best seminaries,” said Monsignor Donahue with a smile.

He said college is a time of formation, wherever it takes place, and West Point, like a seminary, helps cadets develop as human beings and leaders by focusing on integrity, character and service. The intense process of formation is fertile ground for personal growth, he said.

“It’s the perfect setting for anyone to discern God’s calling and purpose for them,” Monsignor Donahue said. “This bedrock of human formation takes place regardless of religious affiliation, but naturally leads to cadets seeking out their faith.”

Monsignor Donahue, former rector of the seminary in his home diocese of Fargo, N.D., hastened to add, “We’re not out to proselytize or pull Catholic cadets from the military to the priesthood.” He noted, however, that two recent Catholic chaplains at the post were West Point graduates who became priests after they fulfilled their military service.

Father Wood echoed the vocation connection. “The cadet population is made up of very serious people who are interested in service. The idea of at least giving the priesthood a thought is not terribly foreign to them,” he said.

Monsignor Donahue is a major in the U.S. Army with 23 years of military service. As a member of the North Dakota Army National Guard, he deployed to Honduras and served on active duty in Germany during the first Gulf War in 1990. He served in Iraq with the Texas-based 56th Brigade Combat Team and was preparing to redeploy with the 3-133 Field Artillery unit when he was assigned to West Point in November 2008.

“I’m a priest in an Army uniform,” he said. “I’m a Catholic pastor, but I’m also a staff officer in the U.S. Army. As a military priest, I answer to many more people than I would as pastor of a civilian parish.”

Monsignor Donahue said the military post’s confined community contributes to the feeling of family. “The sense that they’re my family, the family of God, is evident here. We’re all in the same boat and there’s a tremendous support system. The military is just set up that way.”

“When anyone deploys, I hold my breath as a pastor and pray for them. The motivation to pray is much greater here. It’s like your family is going somewhere – so you’re going to pray. I keep praying that they all stay healthy.”

Well-attended daily and Sunday Masses are celebrated at Most Holy Trinity and in the cadet barracks. During summer training periods, the priests travel to a field location 12 miles from West Point to offer the sacraments to the cadets.

“There is a sense of being separated from everything that’s familiar. They have to start building a sense of consciousness and of self back up again. They are perfectly welcome and very much encouraged to come and talk,” he said.